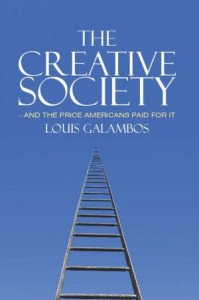 History from the Middle—
Can Experts Lead Us to the Promised Land?

A Featured Review of

The Creative Society– and the Price Americans Paid for It

Historians often serve as a society’s quasi-official storytellers as they narrate the story of a society or its neighbors or its ancestors in ways that give a society, or at least relevant parts of one, an interpretive framework for understanding the world (or at least part of it).  Some stories focus on “great men” and their exploits while others focus on social movements.  Some stories may focus on elites and be told from above while other stories, in Bonhoeffer’s phrase, are told “from below”.  In The Creative Society, historian Louis Galambos tells a moderately optimistic story of American society that focuses on the role of professionals in creatively crafting practical solutions to challenging societal problems.  As servants to elites who not infrequently arose by education from families on the margins, this story of professionals is not told from above or from below, but from the middle.  Galambos tells a sometimes gallant story of the American middle class to that middle class.

A historian from Johns Hopkins University, who has focused on institutions and innovation in American history, Galambos tells a story beginning in the late 19th-century that seeks to explain significant challenges relating to the areas of American urban life, keeping the national economy innovative, the need for economies security and equity, and coping with an emerging American empire.  An able storyteller, Galambos engagingly relates stories ranging from his immigrant grandparents to his parents down to his own life and children to illustrate and advance his argument.  His tale weaves analysis of social developments with brief biographical sketches and anecdotes.  We meet Robert McNamara, W. E. B. DuBois, Hannah Holburn Gray and host of other professionals along the path Galambos leads us.  With anecdote , story and statistics, he also pays recurring attention to the ways African Americans, women and immigrants have not fully shared in the advances made by rising professional groups.

Beginning with immigrants and industrialism in the late 19th century, Galambos shows his readers the role of professional scientists, as produced by educators in an interaction of elite and more plebian public universities, in spurring economic development.  Next he moves to the role of lawyers, my own kind–professionally speaking, in pragmatically crafting the regulations of a rising administrative state to manage this new economic growth. Lawyers, military professionals and diplomats guide politicians in shaping the United States as it moves into the role of a world power with an empire.  With the Great Depression, economists join the ranks of the nation’s aspiring expert guides.  After the Second World War, the U. S. strides as imperial colossus in the Cold War and as it exercises hegemony after the fall of the Berlin Wall.  In a time of domestic suburban and urban growth, yet more professionals, such as M.B.A.’s and urban planners, join the mix of experts.  While Vietnam and the stagnate 1970s economy challenges the wisdom of our best and brightest experts, Galambos moves on to chart the continuing clash of experts in the rise of conservatism.  While remaining positive about the promise of professionals to address social crises, he closes raising serious questions about the trajectory in the George W. Bush presidency with its experts represented by a capitulation to a dangerous imperial hegemony with the Iraq War and to an ideological financial hubris in the just past Great Recession.