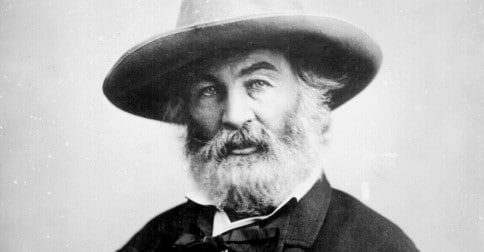 In remembrance, we offer eight Walt Whitman poems that we love from his famed collection LEAVES OF GRASS…

When was Leaves of Grass originally published?

Leaves of Grass was originally published on July 4, 1855 in Brooklyn, New York.

How many poems are in Leaves of Grass?

The first edition of 1855 had only 12 poems, but by the third edition the work had been expanded greatly to 134 poems.

What is the significance of grass in Leaves of Grass?

The image of grass is particularly prominent in the poem 'Song of Myself,' in which Whitman uses it as a metaphor for the cyclical nature of life.

Poets to come! orators, singers, musicians to come!
Not to-day is to justify me and answer what I am for,
But you, a new brood, native, athletic, continental, greater than
before known,
Arouse! for you must justify me.

I myself but write one or two indicative words for the future,
I but advance a moment only to wheel and hurry back in the darkness.

I am a man who, sauntering along without fully stopping, turns a
casual look upon you and then averts his face,
Leaving it to you to prove and define it,
Expecting the main things from you.

UPDATED December 2021: To clean up formatting and additional poems.