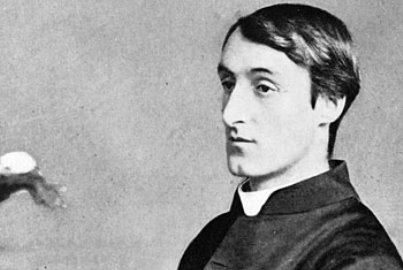 July 28 marks the birthday of the poet Gerard Manley Hopkins.

For the occasion, here are 5 of my favorite of Gerard Manley Hopkins poems …

Reverend Father Gerard Manley Hopkins, S.J. (28 July 1844 – 8 June 1889) was an English poet, Roman Catholic convert, and Jesuit priest, whose posthumous fame established him among the leading Victorian poets. His experimental explorations in prosody (especially sprung rhythm) and his use of imagery established him as a daring innovator in a period of largely traditional verse. (Wikipedia).

The primary collection of Hopkins’s poems
is available as a FREE ebook:
Download now for Kindle  – OR- Various formats via Proj. Gutenberg

When did Gerard Manley Hopkins live?

What is Gerard Manley Hopkins famous for?

Gerard Manley Hopkins, SJ was an English poet and Jesuit priest, whose posthumous fame established him among the leading Victorian poets. His manipulation of prosody – particularly his concept of sprung rhythm – established him as an innovative writer of verse, as did his technique of praising God through vivid use of imagery and nature. Only after his death did Robert Bridges begin to publish a few of Hopkins's mature poems in anthologies, hoping to prepare the way for wider acceptance of his style. By 1930 his work was recognized as one of the most original literary accomplishments of his century. It had a marked influence on such leading 20th-century poets as T. S. Eliot, Dylan Thomas, W. H. Auden, Stephen Spender and Cecil Day-Lewis. (via Wikipedia)

How many poems did Gerard Manley Hopkins write?

Gerard Manley Hopkins wrote less than 40 poems, as a mature poet. In 1875, he burned all his earlier poems and devoted himself to the Jesuit priesthood.

THE world is charged with the grandeur of God.
It will flame out, like shining from shook foil;
It gathers to a greatness, like the ooze of oil
Crushed. Why do men then now not reck his rod?
Generations have trod, have trod, have trod;
And all is seared with trade; bleared, smeared with
toil;
And wears man’s smudge and shares man’s smell:
the soil
Is bare now, nor can foot feel, being shod.

And for all this, nature is never spent;
There lives the dearest freshness deep down things;
And though the last lights off the black West went
Oh, morning, at the brown brink eastward, springs–
Because the Holy Ghost over the bent
World broods with warm breast and with ah!
bright wings.

What are your favorite poems by Gerard Manley Hopkins?