A review of
Cloud of Ink: Poems
by L.S. Klatt. 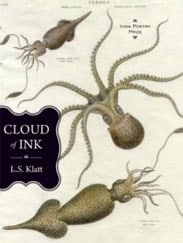 L.S. Klatt’s recent collection of poems Cloud of Ink, a winner of the 2010 Iowa Poetry Prize, is a delightful and far-ranging collection of poems that reflects on, and whimsically revels in, humanity’s place in the deeply-interconnected web of nature. Granted, the poems are rarely straightforward and at times plunge into the surreal.  Consider the lines from which the book’s title is drawn, from the poem “Andrew Wyeth, Painter, Dies at 91”:  “A giant squid rises out of the hayfield, &the barn/ is compassed in tentacles/ then a cloud of ink.”  The same poem is also a fine example of Klatt’s mastery at reappropriating lines and images from other work into his poems; Flannery O’Connor, Emerson, Darwin, Audubon, Picasso and Oliver L. Austin, Jr.’s Birds of the World all supply material with which Klatt deftly weaves together his own images, and the above poem’s title was drawn from Wyeth’s obituary in the New York Times.  I imagine, however, that most readers will – like myself – not be able to pinpoint these reused images until they come to the poet’s notes at the end of the volume.  Klatt excels at forging language into rich, multi-layered images that demand that the reader pause, re-read and reflect on their meanings.  It suffices then to say that these poems require some work, they are like paintings in a gallery, which the viewer might gaze upon for hours on end only to discover a minute detail tucked away in a corner that would escape notice of anyone who gave it a mere moment’s glance.

Klatt’s poems often train their focus on the animal kingdom; the fauna of this collection includes not only a number of deep sea creatures like those that grace the book’s cover – including the giant squid mentioned above – but also highlights Klatt’s particular fondness for birds, from the chickens of “Ohio” who unfortunately “cross I-75 where they are struck / now & then by Airstreams” to the bee-eaters depicted in “Old World Birds” to the “bluebirds, swans / woodpeckers, cranes” depicted in the letters of George Keats to his more famous poet brother, John.  Humanity, in Klatt’s world here, is not aloof from the other creatures that surround us, but rather engaged in a tightly knit, interconnected creation. Klatt sets this tone for the collection with his choice of an epigraph from Wallace Stevens: “In my room, the world is beyond my understanding, but when I walk I see that it consists of three or four hills and a cloud.”  These connections between humanity and nature for Klatt, however, often have their own sort of peculiarity. Thus, the naturalist in the poem “Frontiersman” observing the antelope in the field, who imagines himself, “unzipping the underside/ of the animal & climbing in.”

These days, one rarely encounters a collection of poems that is so deeply immersed in the natural world and yet imbued with a healthy dose of child-like whimsy and fun.  Cloud of Ink is a sheer delight to read, and even more delightful when one takes in the poems slowly, savoring them, frolicking from line to line amidst a menagerie of bold and peculiar creatures.