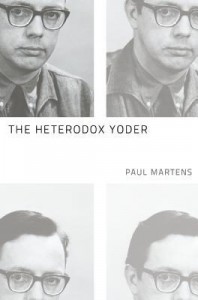 This response is directed at the longer ebook version of Branson Parler’s review.

CLICK HERE for the shorter version of Parler’s review of:

When one writes a book suggesting that an important Christian thinker might best be understood as heterodox, one expects a swift and strong response. In these respects, Branson Parler has not disappointed with his thirty-eight page ebook—The Forest and the Trees: Engaging Paul Martens’ The Heterodox Yoder—that appeared a mere two and a half months after the publication of my The Heterodox Yoder.[1] I sincerely appreciate the conviction evident in Parler’s engagement. Although the length of his review is oddly flattering, it is absolutely clear that his ebook is an energetic attempt to reject my rendering of Yoder:[2] following a brief summary of my argument, it provides a lengthy explication of three central elements of Yoder’s authorship—politics, Christian particularity, and sacraments—that allegedly undermine my argument, ultimately leading to a pithy (and rather brazen) conclusion that not only overturns my application of the proverbial “forest for the trees” imagery but also appropriates and extends my invocation of heterodoxy in order to claim that my reading of Yoder is analogous to heresy.

Parler correctly observes that I view Yoder’s thought as a sort of cautionary tale and that I believe it is important to avoid reducing Christianity to ethics (not, however, because of my experience in Anabaptism but simply because reducing Christianity to ethics is problematic theologically – my experience in Anabaptism has simply illustrated this problem). Yet, Parler also claims that The Heterodox Yoder “only confuses rather than clarifies things” because I do not account for the “whole forest” of Yoder’s corpus (37). At the gracious invitation of The Englewood Review of Books, I offer the following comments of response in order to clarify what I take to be (a) missing from Parler’s analysis; and (b) misleading in Parler’s description of three central elements—very significant trees, to continue the metaphor—of Yoder’s thought.

A. What is Missing.

In standard book reviews, extensive elision and sweeping summaries are entirely acceptable. In thirty-eight pages, however, I find it odd that something as fundamental as an adequate description of the logic of my text is missing. For example, Parler does not address the introductory deconstructive step of the text, that is, the naming and relativizing of the regulative framework that has had a profoundly formative influence on how Yoder has been read. Instead, he backhandedly suggests that I assume my reading is novel simply because I do not take The Politics of Jesus as the most important text. And, in an attempt to demonstrate that my point “would have been more relevant fifteen or twenty years ago,” Parler provides a sampling of authors who have engaged Yoder “from all kinds of angles” (2).[3] In this process, however, Parler not only ignores the context in which I suggest that The Politics of Jesus has been Yoder’s defining text, he also undermines his own argument by acknowledging that The Politics of Jesus “is utilized less and less because its main points are taken for granted by so many” (3).

To note a second and more substantive example, Parler fails to note the overall organization of The Heterodox Yoder that addresses more than merely the prioritization of the political, the dropping of middle axioms, the correspondence with Schwarzschild, Kant, and the sacraments as civil imperatives. To clarify, then, the structure of the book is as follows: the second and third chapters trace a rough chronological development of Yoder’s foundational theological convictions (e.g. the person of Jesus, biblical interpretation, discipleship, the gospel, ecclesiology, nonviolence, and Constantinianism) that culminates in The Politics of Jesus while the fourth and fifth chapters thematically engage Yoder’s thought (the two themes are the reconstruction of Jewish-Christianity and ecumenism, respectively) as it matures in the later decades of his corpus. Of course, I am most willing to acknowledge that there may be significant flaws with the macro-development of the logic of my argument. But not to attempt to provide a sympathetic summary of the logic of the text is to fail to provide a coherent description of how I make a case for the “forest” of Yoder’s corpus. And, if Parler fails to reiterate an accurate account of the “forest” described in The Heterodox Yoder, his own description of select “trees” in Yoder’s corpus can proceed virtually uncontested. I will return to this issue shortly.

Finally, even if Parler is opposed to my argument, I would expect him to introduce, address, and interpret the textual sources that provoked my own examination of Yoder’s thought with some care, especially if he wants “to do justice to the text of what Yoder actually says” (6) and to stand on the high ground of the “totality of Yoder” (37). To his credit, Parler introduces one of the passages that I take to be challenging on page 28 (a passage from “Firstfruits” concerning the Lord’s Supper that I will address below). Yet the texts that indicate Yoder defines Christianity most basically as ethics—e.g. “Discipleship is here understood as denoting…that the Christian life is defined most basically in ethical terms”[4]; “Man’s appropriation of the Work of Christ is by repentance and faith, but neither of these terms is to be understood as orthodoxy understood them. Repentance means ethics, not sorrow for sin…Faith, likewise…is not the acceptance of the proclamation that Jesus dies because of our guilt; it is rather the committal to the faith-union of obedience…”[5]; or “[T]he Anabaptists accepted separation from the state churches, with whom they agreed about everything on the fundamentalist checklist; once again, because discipleship comes first”[6] to reiterate just a few—are glaringly absent from Parler’s attempt to refute my argument that Yoder’s reasoning is problematic precisely because Yoder privileges ethical claims over all others.