“The Right Book for the Right Time
in the Right Spirit
”

A Review of
The Bible Made Impossible:
Why Biblicism is not a Truly Evangelical Reading of Scripture
by Christian Smith. 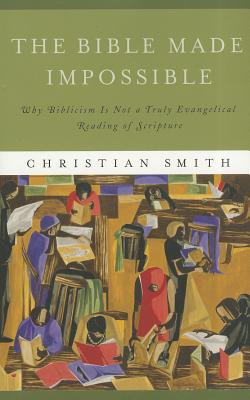 The Bible Made Impossible:
Why Biblicism is not a Truly
Evangelical Reading of Scripture
by Christian Smith.
Hardback: Brazos Press, 2011.
Buy now:
[ ChristianBook.com ] [ Amazon – Kindle ]

When the churches of Asia were struggling under the weight of first century Roman imperialism, God gave to them letters and a Letter (Revelation) to encourage continued faithfulness and to give particular direction for that faithfulness. At the end of each letter (found in Revelation 2 and 3), one finds the familiar words, “He who has an ear, let him hear what the Spirit says to the churches.” Whether in perceived crisis or not, churches need to listen for the voice of the Spirit. Appropriately, churches today listen for the voice of the Spirit in the words of the Bible. However, what is being heard and that which is being lived out together by church members is stunningly diverse and visibly contradictory. When these differences among various congregational expressions of the one Church of Christ are probed, one finds many sincerely held convictions which are defended tenaciously as precepts which are rooted deep within the Bible.

This is not written as avoidance of the reality of unfaithfulness in living the convictions which are held, but clearly there are considerable differences of interpretation in handling the written Word. Surely the Church and her many denominational and congregational expressions must be approaching a time of decision…a day of judgment (what the Greeks called “crisis”) where we give up the notion that the Bible is in any realistic way a self-interpreting document and that any individual Christian can interpret it faithfully apart from a shared life with a community of committed brothers and sisters in Christ.

No book and certainly no one book could push the Church to the brink of such a “crisis”, but I am convinced that the Spirit is speaking to us through Christian Smith’s The Bible Made Impossible. Smith, a Professor of Sociology at Notre Dame University, is an unlikely prophetic voice on the one hand, but a very appropriate one for the critical audience of such a book. He is unlikely in that churches expect prophetic utterances from either “superstar” pastors or highly credentialed professional theologians; Smith is neither. While he is certainly well-educated (a PhD from Harvard University and coursework from well respected schools of theology), he is by his own admission not a professional theologian (xii) and he is not now nor ever has been a member of the clergy. Perhaps the most intriguing aspect of Smith’s experience is his transition from Evangelical Protestantism to “Evangelical Catholicism” ( xiii), a move becoming more and more frequent among many thoughtful and searching believers. His respect for the Scriptures is quite evidently “evangelical”, but his suspicion of “sola scriptura” (an essential conviction of the Protestant Reformation) as practiced in American Protestant Evangelicalism (84-86) is equally evident. The reasons for his attraction to the Roman Catholic tradition is not specifically stated, but the book may help explain his personal transition, and could prove invaluable in helping explain similar relocations by others.