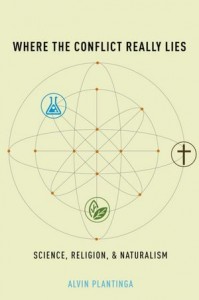 Where the Conflict Really Lies:
Science, Religion, and Naturalism

Alvin Plantinga, the John A. O’Brien Professor of Philosophy at the University of Notre Dame, remains one of the preeminent voices in contemporary philosophy of religion.  In 2004–2005, he presented the prestigious Gifford Lectures, which are presented at Scottish universities each year.  Plantinga follows a long line of distinguished scholars, like William James, Karl Barth, Jürgen Moltmann, and Stanley Hauerwas.  Where the Conflict Really Lies stems from these lectures.  Similar to Barth’s Church Dogmatics, Plantinga’s main argument is in larger print, while more technical details and additions are in smaller print.

Plantinga first notes that an alleged conflict exists between evolution and Christian belief, and science with the concept of special divine action.  Here he interacts primarily with the thought of Dawkins and Dennett.  Dawkins argues that natural selection is a “blind watchmaker,” a purposeless process that explains the existence of life.  Dennett similarly argues that evolution, “Darwin’s dangerous idea,” is “Design out of Chaos without aid of Mind” (31).  Dennett only wants reason to be used to determine truth, but as Plantinga shows with the help of William Alston, this is a double standard, for reason cannot prove that things like intuition, perception, or memory are reliable.  Plantinga rejects their arguments for the incompatibility of evolution and Christian faith, though he does argue that the concept of unguided evolution is not science, but a metaphysical add on to science.

Plantinga then discusses studies that show only “25 percent of Americans believe that human beings have descended from ape-like ancestors” (52).  Plantinga argues many Americans reject evolution because the vast majority of them reject naturalism and atheism, and because they associate evolution with naturalists like Dawkins and Dennett, they reject evolution and question science as well.  Plantinga says that these declarations of incompatibility between religion and science are not only bad for religion, but for science as well.

← Hymn of the Wiltshire Laborers ...