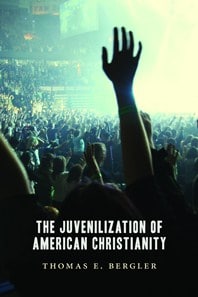 A Culture that is Unwilling to Mature?

The Juvenilization of American Christianity

The Juvenilization of American Christianity is a wakeup call to serious thinking about how we choose to reach out to the younger generation, both within and outside the church.  Thomas E. Bergler points out, in his well-researched book, that how we choose to minister to youth will impact the church for years to come.  Bergler presents a vivid history of Christian culture over the last century, and shows how the decisions made 50, 60, and even 70 years ago are still influencing the church today.  He effectively argues that we need to contemplate our philosophy of youth ministry, and work towards educating our youth to become spiritually mature Christians.

If you are looking for a book on youth ministry with a watered down message and a few quick bullet points, then look somewhere else.  The Juvenilization of American Christianity is a thorough book that consists mainly of a history of youth ministry and youth programs dating back to the 1930’s.  Bergler presents a broad history, not limiting his research to one denomination or generalizations of all Christianity, but instead gives detailed accounts of how Evangelicals, Catholics, Methodists, and African American churches addressed the issue of youth culture.  Some of these groups did better than others, and they all had moments of success and failure.  Bergler gives credit where credit is due, and praises churches who found effective ways of reaching out to youth without compromising theology, and critiques churches who were ineffective with reaching the youth or chose to dilute the Christian message.

I suspect that most people believe youth ministry to be a fairly new concept, dating back 40 or 50 years, but Bergler surprises us by inviting us into the world of youth ministry that existed during the 1930’s, 40’s, and 50’s.  This was a time when the threat of communism was real, and people were concerned about juvenile delinquency.  They were looking for any way to combat these threats, and youth rallies and Bible clubs seemed like a good idea to some.  Bergler informs the reader that our current obsession with youth is not as new as we might think.  He also points out that although the 1960’s were a time of radical change, some of the problems we associate with the 60’s, such as the decline in church attendance, may have begun earlier.  All of this is a great reminder of the importance of looking at our history.

The Juvenilization of American Christianity begins with a helpful critique of society, the church, and youth culture.  The next seven chapters are dedicated to reminding us of the history of churches, youth culture, and youth ministry from the 1930’s through the 1960’s.  In Bergler’s final chapter, “The Triumph and Taming of Juvenilization,” he begins to piece all of this information together, and offers some advice and direction in the final five pages of the book.  The one thing Bergler could have done to make his book better is to expand on these last five pages.  He spends a great amount of time presenting his research, but little time on the solution.  That being said, I still believe this is an important read for all youth ministers, ministers, church leaders, and parents.  It is a great reminder that the things we do with our children really do matter.

Bergler’s work reminds us that reaching out to youth is a complex issue.  Youth are greatly influenced by a culture of their own that is constantly changing.  In the past, churches have tried various strategies and philosophies for reaching out to youth.  Some have seen the youth as the salvation of America against the threat of communism, so they have sought to politicize the youth.  Others have formed their own separate cultures and communities that they are able to maintain and control.  Some mobilized youth to participate in sit ins, while others encouraged youth to form Bible clubs in schools.  Although one group does not stand out as having all the answers to reaching the youth population and many of them came up short, being able to look at how they responded is helpful.

Bergler points out that there was one group more successful than the others at reaching out and retaining youth.  Conservative evangelicals fared better than other groups, and the formula they used to do it is still being used today to reach not only youth, but adults as well.  This approach that has been adopted by many mainstream churches in America today offers an “informal, entertaining, fast-paced worship experience set to contemporary music” (208).  Bergler gives conservative evangelicals credit for maintaining numbers when other churches were in decline, but also points out how their strategy has gone on to influence how they now practice Christianity.  He states, “The white evangelical churches that are growing the fastest in America are the ones that look the most like the successful youth ministries of the 1950s and 1960s” (208).

The main problem with churches adopting this philosophy is an unwillingness to mature.  Bergler points out, “The problem is that by glorifying the process of individual choice and by constantly trying to please young people and attract them to religious faith, youth ministries have formed generations of Americans who believe it is their privilege to pick and choose what they believe.  Even worse, perhaps, is the widespread assumption that it doesn’t really matter what you believe, so long as you believe it ‘sincerely’” (223).   What was once a way of reaching out to the youth generation, has now become standard for adults and the church is suffering because of it.  Bergler does not suggest the church do anything drastic, but that they recognize what is going on and seek to tame it.  His answer to the problem is for churches to focus on fostering spiritual maturity.

The Juvenilization of American Christianity is an intriguing and fascinating read.  It may not be for everybody, but anyone who is concerned about the future of the church should read it.  Thomas Bergler’s book focuses more on the problem than the solution, but it is a great first step, and perhaps will act as a catalyst for a richer discussion on how the church can respond to the problem at hand.