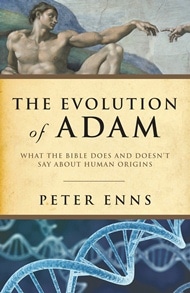 Are the Bible and Evolution compatible?

The Evolution of Adam:

What the Bible Does and Doesn’t Say about Human Origins

Are the Bible and Evolution compatible? That is a question so many people have endeavored to answer, and Peter Enns offers a useful account in his book, The Evolution of Adam: What the Bible Does and Doesn’t Say about Human Origins. First, he answers questions about how to read the origin texts in Scripture, especially in light of other primordial stories of the time, but the differences about Scriptures texts and what those differences say about Israel. The crux of the book is Enns dealing with Paul’s understanding of Adam, however, since that is one of the biggest concerns. If someone were to argue that I should read Genesis figuratively, I can just point to Paul and say, “Well he obviously read it literally. Why shouldn’t I?” Enns scholarship on this is extremely helpful to the dialogue, and I will return to his specific arguments in a moment.

First, it should be said that Enns is to be respected for publishing about this topic at all. Two professors at my alma mater, Calvin College, certainly know the cost of dialoguing openly about these topics. On August 9, 2011, religion professors John Schneider and Daniel Harlow were interviewed on NPR, effectuating national attention to an issue that has been known to the Calvin community since September 2010. Harlow and Schneider were published in American Scientific Affiliation’s journal Perspectives on Science and Christian Faith. Harlow and Schneider were convinced of the overwhelming evidence for evolution, but recognized the theological implications of that would mean theological issues like the fall and atonement would need to be reformulated, since evolutionary processes include death, predation and self-interest occurred in nature prior to sin.

After their articles were published, at a faculty senate meeting, the current college president Gaylen Byker allegedly (according to Harlow) accused the two professors of violating their confessional agreements that they signed when they became professors at Calvin. Harlow’s defense was that he and Schneider went through all the proper channels of publication. Because Byker had been on sabbatical, he had not taken part in the administration’s vetting process of the articles. It should also be mentioned that the Calvin College biology department is quite clear that they believe evolutionary processes are the best explanation for the diversity of life on earth, so it would make sense that the theologians in the religion department would want to support their colleagues by providing corresponding theology.

The short version of the story is to say that John R. Schneider left his position in June of 2011. Harlow is convinced that it was because of this issue, although Schneider himself signed a statement, along with the college’s Provost, saying he had “requested retirement” and that his scholarship “engendered legitimate concerns within the College community.” A blog for the Chronicle of Higher Education, written by Michael Ruse, referred to the statement as “one of those pro-faced statements that say everyone is concerned to work things out for the good of the group and no one is blaming anyone for anything, but goodbye and good luck.” Harlow, however, took up the defense of Schneider and himself voraciously for many months, until he too expressed discomfort in continuing his scholarship in this area, because of the traumatic effect the callous criticism had had on his spirit. Often this is made into an issue of salvation, an unloving declaration of who’s in and who’s out. Before we turn to Enns, I think prayers are in order that Enns will be protected from the attacks of those claiming to be Christians who perhaps feel threatened by this work and treat him uncharitably because of it.

The Consolations of Philosophy
by Alain de Botton
Only $1.99!