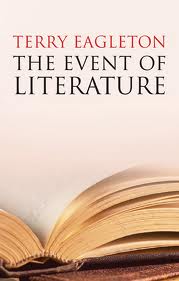 The Event of Literature

Only Terry Eagleton, the one-time radical leftist theologian who became Britain’s foremost literary critic, would begin a book on literature with a discussion of medieval Catholic theology. In his newest book, The Event of Literature, readers will instantly find themselves getting excited about the debate between Realists and Nominalists in the middle ages, and googling haecceity, Scotism, and Thomas Aquinas. This opening detour down the neglected corridors of Scholasticism turns out to be just the first of many moments that revitalize everything we thought we knew about Literature.

Throughout the book, Eagleton asks a simple question: Is there a single feature that defines Literature, or is Literature just a name we impose on many different kinds of writing? This is not a new question for Eagleton. In fact, it is one that has preoccupied him throughout his career of 40+ years, making major appearances in his celebrated Literary Theory: An Introduction (1983) and in The Illusions of Postmodernism (1996). Finally, in The Event of Literature Eagleton claims to offer a definitive answer.

The three chapters that make up the middle of the book ask whether features like fictionality, moral concerns, or linguistic inventiveness are common to all Literature. Sprinkled as they are with Eagleton’s characteristic shrewdness and Anglo-Irish wit, these remain undoubtedly the most tedious chapters of the book. Each of them cycles through school after school of the Philosophy of Literature and Literary Theory (which, as Eagleton explains, are two very different things) with inconclusive results. Particularly for non-specialists, these chapters will feel like an exercise in frustration. Still, for the reader that follows Eagleton carefully through these explorations, there is a wealth of insight in store. Even if no single theory gets literature 100% right, every approach has its own contribution, and Eagleton is particularly adept at helping his reader to discard the cumbersome husk while retaining the kernel that makes a theory valuable.

For readers of any level of dedication, the concluding chapter, entitled “Strategies,” is not to be missed. In this chapter Eagleton purports to offer nothing less than a unified theory of literature and literary theory, based on the concept of strategy. Eagleton explains that a work of literature always responds to a set of real-world circumstances, but it does so by creating its own self-referential world. This theory allows Eagleton to insist that literature is autonomous, while maintaining that it really does something, or really “makes contact,” with the world it exists in. In this view, which Eagleton calls a “Dominican theory of meaning,” language, like the human body, is involved in the world not by referring to something “outside” itself, but by simply being what it is.

The Event of Literature, like every offering from Eagleton, is a dazzling intellectual adventure, which owes as much to Eagleton’s style as it does to his conclusions. Eagleton evokes the textures of ancient thought in the manner of G. K. Chesterton, while adding a punchiness that bespeaks the influence of Oscar Wilde. Perhaps most memorable are Eagleton’s summaries and examples, which offer a helpful play of the concrete and the abstract, the high-minded and the mundane. For example, in explaining J. L. Austin’s theory of “constative” vs. “performative” meaning Eagleton offers an example involving imaginary purple-spotted lizards from the Isle of Man. Or, consider how he states the gist of psychoanalysis: “There are many ways of not saying something, some of them considerably more loquacious than others.”

This book offers a veritable feast of wisdom for everyone who cares about literature. If you are a veteran in literary studies, this book will challenge and broaden your perspective. If you are a novice looking to brave the theory landscape for the first time, this book is a great opportunity to get acquainted with a must-have guide. If you are simply a lover of books, Terry Eagleton’s work here is sure to remind you of countless ways in which literature is capable of transforming our thoughts, our societies, and our selves.

Brett Beasley is a graduate student in English at Loyola University Chicago. He lives in Rogers Park with his wife and two rabbits.