The Nature of Small Birds: A Novel
Susie Finkbeiner

If you are connected to adoption in any way, I would advise reading Susie Finkbeiner’s The Nature of Small Birds (Revell, 2021) with a critical and cautious eye. The novel, written by a non-adopted Christian author, does not do justice to the many complexities of adoption. Sadly, it also reflects and perpetuates problems that affect the mental and spiritual health of adoptees. Considering adoptees are four times more likely than non-adoptees to attempt suicide, it’s critically important that literature about adoption is held to a higher standard than it traditionally has been—especially in Christian circles where hurtful adoption messaging can be so prevalent.

The Nature of Small Birds spans three generations, centered around Minh—renamed Mindy—an adoptee who came to the United States through Operation Babylift—a program where Vietnamese orphans were evacuated in mass numbers at the end of the Vietnam War to America and other countries. Told through alternating viewpoints, adoptive parent Linda’s storyline takes place in the 1970s just prior to, and shortly after, adopting Minh. Linda’s husband, Bruce, narrates his chapters from the present time as a doting grandfather and soft-hearted, devout husband. Their biological daughter, Sonny, picks up the storyline in the late 1980s as a somewhat self-absorbed teenager.

While Finkbeiner showcases her talent as a seasoned writer by masterfully weaving together three timelines, the novel’s structure, where all family members except Minh have a voice, reinforces a real and problematic expectation: that adoptees remain voiceless while those around us get the lead parts—along with rights to decide when and how to share our adoptee storylines.

This is particularly upsetting because we adoptees spend much of our lives with other people telling our adoption stories—to us and for us.  They tell us what we should think and feel about being adopted, and what our origin stories are (which are usually incorrect, but we don’t figure this out as children). Without our consent, adoptive parents often publicly share our stories. Our role, expressed both subtly and overtly, is to be quiet and feel grateful.

By not including Minh’s point of view alongside the others, The Nature of Small Birds reflects the cultural belief that everyone but the adoptee—the central player in adoption—gets to tell the adoptee story.

Without the lived experience needed to accurately portray an adoptee story, Finkbeiner doesn’t succeed in creating an authentic, or even human, character. Minh comes across, instead, as a fantasy character—a pure, innocent, adoring, sweet, unabashedly loving girl—always with a sunny disposition, ready to fearlessly share what’s in her heart. The view of her is what one would expect to see if wearing saviors’ glasses: poor, little Minh—totally thriving, of course, because she was rescued. This is insulting and infantilizing. It’s also not realistic.

We adoptees, sadly, are often affected for life with attachment issues and manifestations of our developmental trauma. While we’re all unique, there are some commonalities when it comes to our mental health—not accurately reflected in Minh’s character:

Sometimes novels do require suspending disbelief. Not all fictionalized characters are believable. Usually, these are merely writing hurdles.

However, in this case, the fact that Minh comes off as such a flawless character implies to readers that she’s a “model adoptee,” seemingly only there to serve her family. This is a dangerous message, though sadly, one that’s prevailed for decades. Nevertheless, it’s a harmful belief to perpetuate to any of the 100 million Americans who “have either been personally touched by adoption within their families or know someone who is or has adopted”[1]—especially, of course, to adoptees, who are prone to stuffing their true selves in order to behave like “good adoptees” and belong—a matter of life and death, so as not to lose another family.

Contrary to a lot of damaging messaging that abounds when adoptive parents tout phrases like “Your adoption was God’s will,” adoptees exist for more reasons than serving those around us.

Ethical Problem: Christian Values Aren’t Modeled When It Matters Most

Finkbeiner researched adoption and nodded to some of Operation Babylift’s unethical practices—as indicated by a scene where an immigration officer comes to the home requesting Minh’s fingerprints and taking photos to ensure that she wasn’t one of the children unwillingly surrendered to orphanages in “state-sanctioned kidnapping.” The officer leaves, cryptically saying, “That’s all for now.” He’ll review her paperwork and get back in touch.

This is a situation that would and should make any adoptive parent quake, for many reasons. In the scene, Linda is quite rattled by the agent’s appearance—shaking, even. However, even though Linda is presented as a model Christian character with Christian morals, she never thought twice about that day, or looked further into Minh’s adoption to make sure that her newly adopted daughter didn’t have parents in Vietnam who were desperate to reunite with their daughter. Later, when asked by her teen daughters about their memories of the incident, Linda admits that she dropped it because she “just assumed everything was fine.”

Sadly, this is often the norm in Christian circles: to disregard hints of wrongdoing when it comes to adoption and instead cling to more favorable storylines such as, “God brought you to us.” In this way, the portrayal of Linda’s reaction was believable.

Unfortunately though, the consequence of accuracy was a missed teaching opportunity. How refreshing it would have been to show a Christian family waking up to a serious ethical dilemma—even if there was a chance that doing so might not serve their personal interests. With such a storyline, adoptees might have felt seen, their voices welcomed, and perhaps fewer adoptees, as adults, would turn away from God, believing this kind of moral hypocrisy represents our Creator. Additionally, adoptive parents would have learned something new and useful, rather than receiving a reinforcement of antiquated and hurtful tropes.

Finkbeiner is clearly a talented writer. And her book depicts a loving, well-meaning family, and a tender marriage that anyone can aspire to build. But sadly, given the severity of problems with how adoption is presented and the adoptee silenced, the strong qualities in The Nature of Small Birds are overshadowed by the serious harm it perpetuates to the marginalized voices of adoptees.

The author cannot be faulted entirely on her own. Her perspective simply mirrors the prevailing attitude toward adoption throughout the American Church, where adoption has become an idol and gratitude weaponized. Responsibility falls on all our shoulders to take a closer look at adoption’s nuances and do better going forward. Adoptee lives depend on it.

1     National Council For Adoption’s 2017 report, Adoption: By the Numbers, https://adoptioncouncil.org/article/adoption-factbook/ 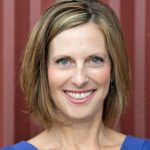 Sara Easterly is an adoptee and the author of the award-winning memoir, Searching for Mom, and a member of the Redbud Writers Guild and Freedom Road Institute’s Global Writers’ Group. Her adoption- and faith-focused articles and essays have been published by Psychology Today, Red Letter Christians, Godspace, Her View From Home, and Severance Magazine, to name a few. Sara is also the founder of Adoptee Voices, leading writing groups and managing an e-Zine to help other adoptees express their stories. Find her online at saraeasterly.com.