A Real and Present Danger

There is a righteous anger permeating throughout the land. An anger fed by centuries of pain and frustration and fear and injustice that eclipses the belief that we are one people—and rightfully so; we are not one people. We are a fractured people living in a fractured world. We turn to our leaders to guide us, to develop the changes and policies needed to create intentional and meaningful and sustainable change. Our country has been here in the past. And in the past, to some degree, leaders stepped forth to help create and cultivate a new world. These changes have never been perfect. These changes have never fully rectified or addressed this country’s original sins of genocidal land grabs and built upon success and prosperity on the literal backs of others. But change came nonetheless. For it is during turbulent times that leaders use their skills to temper fear and hostility. On June 1, President Donald Trump did not temper fear and hostility; he invoked the flames of both. On this day, the President of the United States, along with members of his Cabinet, military officials, and others, dispersed peaceful protestors with tear gas so he could partake in a photo op at St. John’s Church. With a Bible in hand, President Trump peered at the camera, smile absent from his face, never once offering a prayer for solidarity or for the violence to come to an end. His actions said it all: He was the power—not the Bible in his hand, and not the house of God in the background.

Published before this event, The Spiritual Danger of Donald Trump: 30 Evangelical Christians on Justice, Truth, and Moral Integrity is both fortuitous and prescient for our times. Organized in three parts (On Trump; On Evangelical Support of Trump; and, On Theological, Historical, and Constitutional Issues Regarding Trump), across 25 chapters, thirty evangelical leaders, representing Democrats, Republicans, and Independents, and voices from around the globe, examine, discuss, and analyze Donald Trump’s proclivity to place himself before the Lord as a man without blame, sin, or scruples of any kind. (And while there are certainly essays that also call out specific evangelical leaders for encouraging and supporting the behavior of Trump, the essays in this collection focus on the president.) No longer able to be viewed as a warning, the circumstances examined in this collection either happened just before the election of President Trump or during his current term in office.

Christians have never fully agreed on the interpretation of the Bible. Denominations consistently argue over which method of worship and practice of the Christian faith is the “correct” manner in which to live, and the rectifying of this ongoing argument will not be given satisfaction any time soon—and is not really part of this collection of essays; that being said, Christians have the shared foundational value and understanding of how God governs; how He has shared His teachings; and the expectations He has placed upon our shoulders of how to live with our neighbors as Christians. Arguably, Trump has conveniently and repeatedly bastardized these foundational values and teachings to exonerate his past and present behaviors, to mitigate his shortcomings as a humble “man of faith”, and to stoke the fires of division by pitting Christian against Christian. The vitriol spewed from his mouth, a mouth that has endorsed hate groups, the separating of families at the border, the mocking of journalists, and the continual denial of his own shortcomings, is antithetical to the teachings of Christ. Yes, there is the argument that the voters of the United States did not elect a “Pastor-in-Chief” and Trump has his own style that allows for him to “drain the swamp.” But his actions belie the earnestness of this argument. Trump’s nepotism and refusal to be open and honest with the populace exacerbates the evidence of how unfit he is to lead our nation. (Coincidentally, while some of the essays address Trump’s lack of leadership during the pandemic, the issue of race and equality are only tangentially explored.) But do not believe that this collection of essays is merely a convenient medium to lambast President Trump. Each essay is thoughtful, full of analysis, accessible, and direct. And to the credit of each of the essayists, the lack of verbal gymnastics put on display daily by pundits trying to assuage or explain the speech or action of the president are nowhere to be found for verbal flexibility is not needed when speaking truth to power. A few of the essayists dismantle the argument that Trump is nothing more than an imperfect servant of God much like King David or Cyrus the Great. The greatness of these two examples of leaders is not an overlooking of past imperfections, but in the growth of these imperfect leaders to exalt the Lord by way of wisdom, forbearance, and humility.

As followers of Christ, we are demanded to be humble and reflective, charitable and full of love for our neighbor. In a sense, as followers, we are encouraged to be a voice of reason and hospitality within the realm of human debate. This does not mean that we will always agree or even like different perspectives. In fact, many of the authors of these essays do not agree with each other about many aspects and behaviors on display of the current president. But each of these voices have decided to no longer tolerate the willful and neglectful undermining of the US Constitution, the rule of God, and the responsibilities of holding those in authority accountable.

Each essay warns, to a certain degree, the dangers of blind obedience. Yes, we are charged with praying for our leaders—but this does not mean that we are to remain silent in the face of injustice and cruelty and wanton debasement of Christian values. As a father, husband, son, brother, and member of society, each essay challenged me to look beyond the actions of the president and to reflect on how my silence may have attributed to someone else’s pain, or the continuation of a system that intentionally creates disadvantages for others while elevating my own privilege. We are all made in His image regardless of any societal label thrust upon us by chance or circumstance.

By the end of the readings, comparing Trump’s notion of truth to biblical truth, these authors provide multitudinous examples of how Trump has showcased time and time again that his boastful, deceitful, and careless interpretation of Christian values undermines the rule of God. As the authors elegantly argue, the people—all people—of the United States deserve a leader who is able to pursue justice and reconciliation, bring harmony among the divisive discourse, and compassion in an uncertain time. President Donald Trump is not this leader as these essays articulate. And I agree. 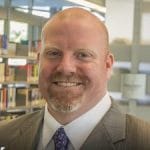 Gavin J. Woltjer is the Executive Director of the Billings (Montana) Public Library. Currently the President of the Montana Library Association, when not held hostage in a good book, he enjoys exploring the wilds of Montana with his wife, Rena, and three children. His research interests include: data analytics; library leadership; Christian leadership; economic development and libraries; archives and record management; and, librarian as public historian. Follow him on Twitter: @GavinWoltjer.