White Borders: The History of Race and Immigration in the United States from Chinese Exclusion to the Border Wall
Reece Jones

Immigration policy is a proverbial “third-rail” topic in American politics: it has a strong tendency to evoke passionate—sometimes even violent—responses from both conservatives and liberals. As such, the fate of immigrants in the United States both documented and undocumented remains one of the most controversial areas of law in our society. Presidents and politicians alike refrain from wading into the debate for fear of alienating their audiences. Though it is inherently complex, Americans have a tendency to view immigration issues as black or white with little tolerance for nuance. There is some literal truth to that assessment, as demonstrated in Reece Jones’ most recent book, White Borders: The History of Race and Immigration in the United States from Chinese Exclusion to the Border Wall.

Drawing from historic texts, including letters, news articles, biographies, reports and even speeches, Jones outlines how white nationalism and eugenics formed the underlying basis in the evolution of immigration law and policy in the United States. Divisive immigration policy is evident even in its earliest iterations, as California Nativists, frustrated with the competition from Chinese labor, began to clamor for restrictions to prevent “the replacement of the white race.” Though former president Calvin Coolidge ran in the 1920s, his campaign slogan, “Keep America American,” sounds eerily familiar to that of former president Donald Trump in 2016. White Borders reads less like a history and more like a compelling novel. Jones is adept at drawing out the background and character of our past while connecting it to recent events, like the white nationalist rally in Charlottesville, Virginia in 2019.

Although discrimination against foreign migrants has been extensively chronicled in other immigration histories, White Borders draws a throughline from early American exclusion initiatives against Chinese and Japanese nationals to the racist policies implemented during the Trump administration with meticulous clarity and research. Jones details the racist players involved in early American eugenics and population control movements, all spurred by the feared erosion of white people and white culture amidst diverse newcomers.

While there might have been progress during the civil rights era, Jones vividly describes how “since the passage of the 1965 Immigration Act a new anti-immigrant movement has grown in the United States.” The names and origins of those involved in historic anti-immigrant movements may surprise readers, as they include individuals like Margaret Sanger, whose proponent of abortion was in part due to her fervent support of eugenics. The revered conservationist John Muir believed that “population control” was imperative for environmental protection (conveniently omitting that the protection of the environments in question first required removing the original inhabitants) and saw immigrants as particularly problematic in this regard. His views align with more recent figures, like John Tanton, an opthamologist from Michigan who became a prime mover in modern white supremacy.

Jones discusses the long and complex background of Tanton, whose zealous defense of the environment came to focus on reducing the population of undesirable foreigners in the United States and began to focus solely on reducing and restricting immigration. The founder of numerous anti-immigrant nonprofits and think tanks (collectively referred to as “the Tanton Network”), he worked in the shadows for decades to influence American policy and regulation. When he died in 2019 at age 85, Tanton had possibly done more to fund and bolster anti-immigrant opinion than anyone else in American politics.

By outlining the racist history of anti-immigrant movements and resulting laws, and illuminating key actors with outsized influence on the immigration debate over the past few decades, Jones underscores that much of what appears organic and grassroots is in fact part of a carefully organized propagandist strategy to co-opt ordinary Americans into the scapegoating of foreign migrants under the appearance of protecting American families, workers and values. Designed and perpetrated by the Tanton Network and others, the ultimate aim is one of expelling immigrants and closed borders to ensure the providence of white America. In many ways, the efficacy of the anti-immigrant movement in reducing immigration debate to a hopelessly polarizing issue is a testament to the vulnerability of our communities—and politics—to be influenced by the rhetoric of fear.

Recent anti-immigrant fervor, stoked by the Trump administration and executed in hardline enforcement policies including family separation and expedited “direct-back” deportations, has culminated in egregious violations of international refugee law. It has also become popular in the rising Christian nationalist movement we see around the country today.

Led largely by evangelical leaders across the U.S., Christian aversion to immigration draws heavily on the concepts of inclusion and exclusion, the same language of borders that Jones has described as “inherently violent.” The appeal of walls calls up the idea of who really belongs, and who does not—who is deserving of freedom, of safety, of protection—and who is not. While the individuals, churches and pastors who dominate this movement are primarily white evangelicals, the Christian leaders advocating for family separation, restricted asylum policies and lower resettlement numbers in the midst of ongoing conflict abroad affects all Americans who identify as Christian. That Christian nationalism has increasingly embraced anti-immigrant sentiment, most notably in support of the now-defunct Muslim ban and drastically lower numbers of refugee resettlement numbers, should concern members of any faith.

Ironically, some of those Christians are the same names that Jones quotes as leaders in pushing against humanitarian immigration laws. Jeff Sessions, who became attorney general in the Trump administration, quoted the Bible in justifying the separation of children from their families seeking asylum at the border.  Why do so many of the same politicians arguing against migrants turn around and quote scripture on other issues? More importantly, why are so many Christians, evangelical or otherwise, not taking a stand for the poor, the widowed, the stranger, and those most in need of protection?

Racism—alongside the deeply flawed and horrific theories of eugenics that Jones details—creates a convenient mechanism to rely on in defining who is good, who is worthy, and who is not. Who to include and who to exclude. Relying on rhetoric about law and order obfuscates the true intent of many American immigration policies, about which Jones writes, “[I]mmigration laws are a central, but often unrecognized, part of the white supremacist vision of the United States as a white country.”

Thanks to Jones’s White Borders and other books that chronicle racist origins of American immigration policy, we cannot claim ignorance of the white nationalist undergirding of arguments that shape debates on foreign migration. Further, we as Christians cannot continue to ignore the responsibilities dictated by scripture that we must love our neighbor as ourselves. What shape that compassion takes is up to us to evince in our own lives, our churches, and our communities—comprehending fully that love and compassion will be met frequently by opposition and hate. Accounts like White Borders illuminate our past and provide us with insight that by understanding our history, we might continue to strive for a better future. 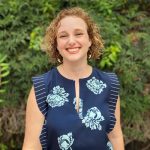 Bonnie Rubrecht is a writer and poet living on the central coast of California. She is an editor for the faith-based journal of art and theology The Unmooring and a graduate of Westmont College. Her work has been published in New South, EcoTheo, and The Curator, among others. Find her on Twitter at: @brubrecht