What it Means to be Christian Now

Many will be drawn to this book because it has the name and visage of Deitrich Bonhoeffer affixed to it. Bonhoeffer’s star has been on an ever ascendant trajectory for some time now. While he may not provide the same amount of grist for the theological mill as his teacher Karl Barth has provided, he is readily acknowledged by many in the broader Christian literati as a penetrating thinker and someone to be deeply admired. Bonhoeffer’s work was open to the contemporary questioning and struggle of Christian identity and mission in the modern world. It was exactly at the center of this struggle that Bonhoeffer and others planned and failed at assassinating Adolf Hitler. For this fact alone much ink has been spilt. Thankfully this book is more interested in the works written in prison and Bonhoeffer’s underground seminary than the Hitler affair.

In the late summer of 2019, I was standing next to a path that led to the train station that locals boarded to get to Moscow. At this spot stood a cross with the name of Fr. Alexander Men, a Russian Orthodox priest who had been struck on the head from behind with an ax. The cross marked the place of his murder and for many, his martyrdom. His voice had been one of the brightest and loudest as the Soviet government began thawing and allowing religion and other voices to come over the airwaves and even crop up on television. Fr. Alexander was well-read, articulate, and passionate. You can see it in his face as much as hear it in the words he penned. He was for the Russian Orthodox Church like a brightly restored icon who spoke volumes to the newly opened ears and hearts of the Russian people. He was able to bring out the detail and the depth of the faith to a people who had been dulled by the Soviet system and philosophy of materialism and dogmatic Marxism. He brought an openness to dialogue with contemporary culture and the broader world of ideas– something which struck many youth of Russia as incredibly powerful, as they were used to associating the Orthodox Church as irrelevant, merely a place for old women to gather, mutter, and sigh aloud their prayers. With the wonder of YouTube, one may find many of his broadcasts and well-attended public lectures. While you may not understand the Russian he speaks, you can discern his faithful and passionate witness. Next to the spot where he was murdered there stands the church he served, his former home, and a museum dedicated to his work. To this day his influence is felt throughout Russia and even further abroad.

Lastly, scanning the cover of this book, one comes across the name Michel Evdokimov. The name Paul Evdokimov is familiar to those acquainted with the broader scene of theology in the 20th century. Paul was a Russian emigre in France who wrote on theology, beauty, femininity, Dostoevsky, etc. He was also an official Orthodox observer at Vatican II. You may have put two and two together and guessed rightly that Michel is his son. Father Michel served as a professor in France and has written many books on Orthodox spirituality. His writing is as lyrical and warm as his father’s. In other words, you will be strengthened and enlightened if you happen to read his work.

The core content of this book is the translation of a series of lectures Evdokimov gave at the Collège of Bernardins in Paris in 2014. While reading the original context of the book, the flow of the text is congenial and warm, like a good deep discussion over a cup of coffee, rather than a heavily footnoted and carefully worded argument trying to drive at some particular delicate point to further a CV. This does mean that it is more dedicated to hitting highlights of Bonhoeffer and Men and not a deep dive into their works. If you are looking for a profound theological meditation, this is not it. If you are looking for an encouraging set of talks about two Christians wrestling with what it means to be Christian now, then this is a book for you.

The lectures are the fruit of much of the foment of theology in the mid-20th century as it grappled further and further with the incredible challenges of modern life: the pace of secularization, the overspilling of globalization into every person’s life, and the terrible forces of totalitarian regimes, facist and communist. Bonhoeffer and Men both represent intelligent and vivid responses to these challenges. They are accepting the march of secularization not by trying to ignore or wage war with it specifically, but to work with the new constellation of challenges it brings to the Christian faith. This means thinking of the Church as a servant and less as the accepted custom and having an always-already-assumed place at the cultural or political table. This means creatively engaging with the various new challenges from the depths of the tradition and not just trotting out stale and premade responses from a by-gone era.

I would be remiss in not mentioning the incredible essay “The Common Mission of Christians in the Secular City” by Olivier Clément included in Two Martyrs in A Godless World. To be honest, for me this essay is worth the cost of admission. Clément was a contemporary of Evdokimov and was also working in the same vein of theology, himself being a professor of Orthodox theology and engaging with the contemporary West through his work at St. Sergius Orthodox Theological Institute in Paris.

You may not learn anything new about Bonhoeffer but you may be pleasantly intrigued and drawn in by the life and work of Fr. Alexander Men. We all benefit from encountering those who worked in the vineyard before us. May you also benefit from this encouraging set of talks from Fr. Michel Evdokimov as you labor in God’s vineyard! 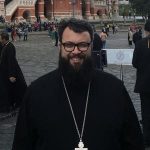