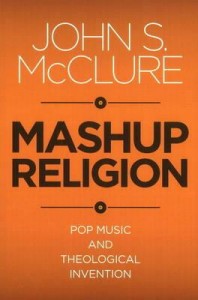 To the uninitiated, the term “mashup” probably doesn’t sound too appealing, and when applied to the context of theology, it would seem especially spurious and dangerous in certain ecclesial circles. However, the average pop music fan would define the term “mashup” as such: a new song that combines material from two different songs, often from different genres, with the purpose re-introducing those original songs to the listener by providing fresh energy in an inventive context. Typically, these mashups fall into one of two primary categories: 1) the lyrics from one popular song (whether pop, rock, R&B, hip-hop, etc.) are laid atop the musical hook from another popular selection, usually to charm a wide range of people; or 2) the lyrics from a well-known track are combined with the hook from a lesser-known song, often attracting folks who listen to music outside of the musical mainstream.

Thus, the beauty of John McClure’s new book – Mashup Religion: Pop Music and Theological Invention – is in how deftly and intelligently he creates a powerful metaphor wherein he directly and positively teaches how theological practitioners in the 21st century have much to learn from their music-making contemporaries. In particular, he makes a direct parallel between how clergy write sermons and minister to others and how artisans write songs and produce records for their fans. He expressly does not advocate the smashing together of disparate ideologies and theologies for the purpose of inventing heterodox concepts. Instead, he encourages the creative combination of various sensibilities, beliefs, and traditions in an attempt to present different perspectives for people living in our postmodern milieu.

Moreover, as a preacher, teacher, and professor of semiotics, McClure presents his arguments, examples, and lessons in a classic Socratic style in that he leads, guides, and shows, but he never “tells.” He provides ample room to the reader to inject his/her own perspectives and experiences into the overall flow of the book. Specifically, neither the concept of “new wine into new wineskins” (Matthew 9:17) nor the Wesley Quadrilateral (Scripture, Tradition, Reason, and Experience) is mentioned directly, but they are implicitly referenced regularly in nearly everything that McClure presents.