Liars, cowards, rescuers, and lovers. Characters you can recognize in the pit of your stomach and others you hope never to meet. The Moment of Tenderness introduces us to a lineup of memorable saints and sinners who remind us that humanity is flawed beyond belief yet worthy of redemption. The saints are faithful caretakers and longsuffering bit players who are achingly authentic and distressingly familiar. The sinners are jealous, combative, haughty, and overbearing; yet given every opportunity to redeem themselves and their choices.

Madeleine L’Engle’s granddaughter, Charlotte Jones Voiklis, author of the biography Becoming Madeleine, has brought us a new collection of old stories. Papers and unpublished manuscripts were gathered from 3 different houses where her writing was stored. Much of the content in the stories are almost uncomfortably autobiographical, revealing Madeleine’s loneliness, fear of disconnection, and sadness during certain periods of her life as an adolescent in a boarding school, her young adulthood spent in Greenwich Village, and her early years as a mother and published author. You see glimpses of this in her novels, but this collection gives us unique insight into L’Engle’s personal life and brings her closer, making her more relatable and human.

The first five stories begin with “The Birthday,” about a child on the eve of turning eight. We meet young protagonist Cecily Carey cold and shivering in her bedroom window as she experiences her first identity crisis. She expresses herself in a stream of consciousness, her thoughts tumble out of her in rapid-fire sequence, questioning her being and existence, “. . . because the world had changed all of a sudden and it wasn’t hers anymore and she didn’t know who owned it.” She feels small and frightened. As the story closes she cries for her mother from her bed but when nobody answers, she tells herself the truth about who she is and how she is loved and how she belongs. She gets up with bravery and confidence and takes care of herself. It’s a brilliant opener for the collection as it sets us up for a narrative journey through universal experiences of personal growth and hard won maturity.

L’Engle continues her coming-of-age theme with children who are absorbing trauma from their parents, being bullied at boarding school, and humiliated and rejected at summer camp. The characters get increasingly older until “While in the Moon the Long Road Lies,” ending with a young woman about to go to college, desperate to escape her stifling Southern town. The people who inhabit these stories are lonely and naive, longing for connection, for something more, something other. They are also stalwart and resilient. Unafraid of the rawness of their emotions, reminiscent of Madeleine’s most loved heroines like Meg Murray in A Wrinkle in Time but most of all like Madeleine herself.

Collisions with loneliness continue with conflicts between a mother and daughter, between sisters, neighbors, and friends, all of them desperate to forge their own paths and build a life for themselves while attempting to at least preserve the relationships if not create stronger, more independent ones. L’Engle carries inner strife further with narratives about romantic and professional jealousy, a murderous daughter-in-law, finding place and belonging. In “The Foreigners,” a young couple, new to a small New England town, creates a stir with their bourgeois opinions and general snobbiness. But after a public breakdown and house fire, they are folded into the community in unexpected ways. It ends with a profound and insightful quote which encapsulates the whole collection, “ . . . perhaps we’ll never feel like anything but newcomers in this tight little community. But where, after we have made the great decision to leave the security of childhood and move on into the vastness of maturity, does anybody ever feel completely at home?”

For the readers that are diehard Wrinkle Quartet fans, she offers two standout stories, one fantasy, and one science fiction. In “Poor Little Saturday,” a teen-aged boy weakened and isolated by malaria explores a haunted house left vacant since the Civil War. He meets a girl he suspects is a ghost. She notices he is unwell and takes him to meet “Her,” a tall, ageless, extraordinary woman with a fawn in her lap and a leopard at her feet. She creates a concoction of peacock’s hearts and a pinch of stardust for his malaria and heals him. He is soon included in their secret, strange cohort.

The finale of the collection is “A Sign for a Sparrow,” reminiscent of the classic, vintage, science fiction paperbacks of the 1950s and 1960s. Earth is plagued by radioactivity, human sacrifice, and birth defects. Only two in five children survive their first few years. The culture seems to be a mix of futuristic science and ancient religion. The horizon glows green. Churches are being closed and turned into state nurseries for the growing population of deformed children. The main character, Rob, is a God-fearing Christian, a minority among the dark cults and idol worshipers.

“The scientists were to blame for the war and because three-fifths of the surface of the earth won’t be habitable for at least another hundred years. And the men of God were to blame because they—and their God—hadn’t done anything to stop it. But the scientists are back in grace because without them we’d be back in the caves, and the men of God are still in disgrace because only a handful of people realize to all intents and purposes we are back in the caves.”

This collection is Madeleine at her best, pithy and witty, drawing meaning out of loss. While distilling philosophical and theological concepts in such a way that they don’t rattle around in our heads, elusive and confusing, she plants eternal truths in our hearts with her keen perception of humanity; its disappointing shortcomings and tattered victories. But she never leaves it there. L’Engle has a gift for setting us up for despair while coming in hot with hope as she herself, and her characters, show us how to “live by paradox and contradiction and surprise.” 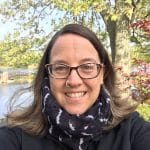 Tammy Perlmutter is founder and curator of The Mudroom (mudroomblog.com), a collaborative blog encouraging women to speak truth, love hard, and enter in with each other, and co-founder of Deeply Rooted, an annual worship and creativity gathering for women. Tammy is a member of the Redbud Writers Guild and lives in Chicago.