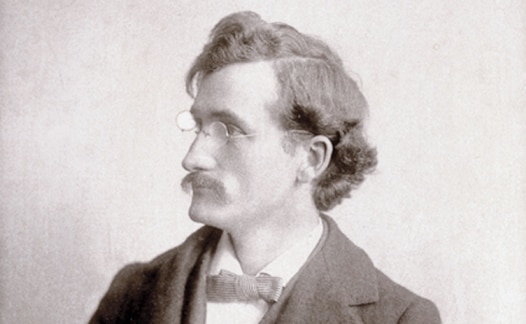 Tomorrow (March 15) is the birthday of one of my favorite poets, Liberty Hyde Bailey.

Bailey was one of the most prominent American botanists and horticulturalists of the early twentieth century.  He was also an agrarian writer and one of the fathers of the Country Life Movement, and yes, also a nature poet.

Here you can read some of his poems that have been posted on our site over the last 6 years:

Here is the introduction to the newest edition of Bailey’s main collection of poems WIND AND WEATHER, in which I argue why Bailey’s voice is an important one for our times…

“The Prophetic Power of Poetry”

An Introduction to
Wind and Weather.
by Liberty Hyde Bailey.

Liberty Hyde Bailey, born in 1858, was raised on a farm in Michigan and it was farm life that would set the tone for the rest of his life.  He studied first at the Michigan Agricultural college and then under renowned biologist Asa Gray at Harvard.   From there, he maintained a long and successful academic career teaching botany and horticulture in Michigan and then later at Cornell in Ithaca, NY.  He wrote a number of significant books for academic and popular audiences on plants, agriculture, rural life and conservation.  His writings were foundational for today’s new agrarian writers, and he has been praised extensively by Wendell Berry, Gene Logsdon and others.  Bailey’s writings in botany are well-known and his essays rooted in rural philosophy are also widely recognized. However, much less is known about Liberty Hyde Bailey, the poet.  This volume, originally published in 1916, was the only collection of Bailey’s poetry that received widespread distribution.

Most of what we know about the context out of which Bailey wrote his poetry has been provided in his essay on “Nature Poetry” in the book Outlook to Nature.  Three key virtues of nature poetry that he describes in this essay are connectedness, keen observation and clarity.  Bailey firmly believed that the nature poet must be intimately connected with his subject, and especially that his/her poems should be written outside in nature, and he strongly critiques the “bookishness” of nature poetry that originates indoors in the study.  Secondly, the true nature poem in Bailey’s estimation, arises out of keen observation of nature, guided by the knowledge of at least a little science (to provide language to frame one’s observation and to give him “point of view” – i.e., to tell him “what to look for” (OTN 38).  Lastly, Bailey argues for the clarity of the nature poem.  He explicitly rejects most poetry, citing slavery to “traditional forms of verse and line” (OTN 32) and their tendency toward “ambitious disquisitions, long periods, heavy rhetoric, labored metaphors” (OTN 29).  Instead, he hails the work of Whitman, who “has most completely freed himself from the bondage of literary form” (32).