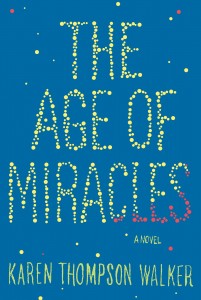 The Age of Miracles

Shortly after I finished reading The Age of Miracles, I found myself gushing about the book to a gathering of avid fiction readers. I was surprised by my own enthusiasm, to be honest. I liked the book well enough, despite its notable shortcomings. Karen Thompson Walker’s prose only occasionally sparkles, and the plot of the book isn’t necessarily gripping. But what it lacks in style it overcomes in concept, for as I urged my friends to track down copies of the book, I realized I was speaking almost exclusively about the brilliant, simple, and wildly compelling concept Walker dreamed up for her debut novel: the earth’s rotation slows down.

The inexplicable slowing starts subtly; no one even notices the addition of a few rogue minutes the first day. But before long, the earth’s rotation decelerates to stretch daylight to eighteen, twenty four, forty-eight hours – with accompanying spells of darkness. The consequences of the slowing are profound and far-reaching, and Walker’s exhaustive coverage of the environmental, political, psychological, and physiological effects of the slowing is fascinating. That said, I occasionally detected the seams in the novelist’s writing process. Certain passages read like brainstorms, and I could picture Walker scribbling lists of potential havoc such a scenario could wreak. Nevertheless, Walker’s attention to detail is part of what makes The Age of Miracles so chillingly believable.

As for the other major contribution to the novel’s believability: meet Julia, the young narrator who appears to have been unjustly ripped from the pages of a nice young adult novel and thrust into this dystopian nightmare. The “age of miracles” to which the title refers is not the surreal upending of basic physics, but Julia’s early adolescence. Julia is anything but unconcerned about the slowing, but she is equally engaged in the ordinary struggles of growing up. You can’t spend all your time fretting about whether or not people should continue to follow “clock time” despite the lengthy days when there are friend troubles, training bras, flawed parents, and a cute boy to consider. Julia’s normalcy is poignant in such an abnormal context, and the fact that she survived to tell the story – though she is eleven in the book, she recounts the events from a future point – provides a splinter of hope that the earth doesn’t tumble from its life-giving orbit altogether.

In the midst of the slowing, Julia’s teacher assigns her class to read All Summer in a Day by Ray Bradbury. The short story, which was first published in 1954, is set on Venus, where a colony of humans has been established and where the sun only comes out for a brief interlude every seven years. It is a devastating tale. Margot, the class pariah who is the only child who remembers anything but torrential rain, is locked in a closet by her classmates and is consequently barred from seeing the sun. The children realize they have forgotten her – they didn’t intend for her to miss the shining moment – and Bradbury impeccably depicts their horror upon realizing the enormity of their crime against the hated girl.

Walker’s reference to the story is intentional, obviously. If All Summer in a Day wasn’t Walker’s direct inspiration for The Age of Miracles, I would be surprised if it wasn’t the object of the novelist’s aspirations. It is an exemplar of science fiction; the premise is otherworldly but the characters are terrifically human (and terribly inhumane). I reread the Bradbury tale – it’s been many years since my own sixth grade teacher assigned the story – and was moved to tears twice. Once, by a line that would otherwise be utterly mundane:  The sun came out.  Again, by the children’s realization that Margot had not come out, and that their own cruelty was at fault.

The Age of Miracles is ambitious, and while it misses the standard set by Ray Bradbury, it does so only by a measure. The book succeeds more as engrossing and highly readable science fiction than as a coming of age story. If the earth’s pace hadn’t lagged – if Julia were lucky enough to be spirited back to the nice young adult novel from whence she came – I’m not sure the minor vagaries of her adolescence would still turn pages or stir emotions. Yet Walker seems to anticipate this, and boldly challenges any reviewer cynical enough to make such a critique. Julia reflects, “It seems to me now that the slowing triggered certain other changes too, less visible at first but deeper. It disrupted certain subtler trajectories: the tracks of friendships, for example, the paths towards or away from love. But who am I to say that the course of my childhood was not already set long before the slowing? Perhaps my adolescence was only an average adolescence, the stinging a quite unremarkable stinging. There is such a thing as coincidence: The alignment of two or more seemingly related events with no causal connection. Maybe everything that happened to me and my family had nothing to do with the slowing. It’s possible, I guess. But I doubt it. I doubt it very much.” Julia and her average adolescence are as trapped in the new physics of Walker’s frightening speculations as Margot was trapped in that closet.

While we can be confident that its brilliant, simple, and wildly compelling concept shall never come to pass, the reality is that we are already experiencing the effects of subtle transformations to the earth. The people of the invented world could do nothing to quicken the earth’s rotation, but the people of the real world are told that there are in fact many things that can be done to slow the onset of climate change. When you step back and think of it, is the subtle warming of the earth any less frightening a scenario? And it is broadly considered by the scientific community to be far from fiction.

Katherine Willis Pershey is author of the recent book, Any Day a Beautiful Change [Read our review…]