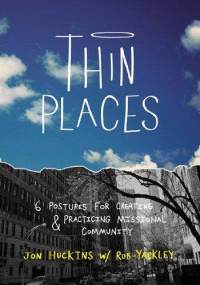 NieuCommunities, intentional Christian communities currently located in San Diego, Vancouver and South Africa, were founded on the understanding that God’s Kingdom is being realized here and now, and that as Christians we are called to live radically and missionally. Jon Huckins, the primary author of Thin Places recounts the story of St. Columba who described the experience of prayer for his community at Iona as a “thin place”: a place where heaven and earth were narrowly separated. Holding together the idea of thin places, along with the unique and complementary callings of monasticism and missions, Huckins and the NieuCommunities have ordered their lives around 6 “postures” that exemplify for them what Christ has called them to be as communities and individual families.

NieuCommunities’ use of the word “posture” as opposed to, perhaps, the more traditional “spiritual discipline” offers the corrective that these practices aren’t just something NieuCommunities do, but they shape intimately who they are as a community. The six postures, which the communities came to after their early period of failures (largely because they sought to “do” too much!), are reviewed by the communities each year and offer a framework for self-identity and a challenge to follow Christ more deeply. The postures are (in order); Listening, Submerging, Inviting, Contending, Imagining, Entrusting.

For someone steeped in more-or-less traditional American Churchgoing, these postures offer a radical invitation to bring Christian faith outside the walls of the church and discover what it might mean to follow Jesus into the neighborhood, ghetto, or, in the case of NieuCommunities South Africa, the segregated township. Huckins and his co-writer, Rob Yackley, are not shy in (I believe, rightfully) naming the dangers in the West’s prominent paradigm of Church: extractional. “The traditional church is extractional in the sense that it extracts people from their local contexts to addend a church service and inadvertently teaches that church is something they go to rather than who they are in the places they inhabit.” ( 50, emphasis mine). NieuCommunities sees following Jesus in community as most effective when influenced by monasticism, focusing on deep formation of believers, and mission, by calling believers to join God’s Kingdom work wherever they are or to go obediently where God calls them. The six postures outline a process newly forming communities, whether they be within a congregation or inhabiting the same space and neighborhood, and perhaps even individuals could follow to begin to explore missional-monastic living and dive deep into God’s Kingdom call.

As a reader involved in a missional community in my own context, and having learned much from the struggles and hopes of community, I was grateful that Listening was the first posture and practice suggested in Thin Places. I was particularly grateful for that posture to be so emphasized when it became clear that the writer of Thin Places, as well as the majority of the members of NieuCommunities are white, middle class peoples who have re-located to urban, multiracial and largely poverty stricken areas of the world. (I make this assumption based on the faces of the interviewed members of the communities in the accompanying DVD.) Listening as a primary posture, in such a situation, must be integral and primary in all aspects of community life and ministry. As Huckins understands, in order to truly make a difference for Christ in your neighborhood or context, one must first listen and understand the history, primary stories and hopes of hurts of the people that are your neighbors.

Each chapter, one per posture, engages the Biblical narrative that sparked the rationale for the posture (largely focused on the life and call of Jesus), stories of how NieuCommunities have learned to live that posture, and a list of “Integrating and Sustaining Practices” that offer tangible suggestions for readers and groups. Lastly there are questions, titled “Missional Possibilities”, that are perfect for small group discussion, as well as extra questions for discussion along with the accompanying DVD in the small group edition of Thin Places. The postures do build on each other. As I understood it each community spends a month reviewing each posture each year and participating in various personal and communal exercises to remind themselves how to live fully “submerged” (posture #2) in this way of life with Jesus. Some of the practical suggestions offered in either the narrative or listed forms I found challenging and unique. For instance, as part of the Contending posture, the South African community practices attempting to live (as families or individuals) on half of their normal monthly budget one month out of the year as an exercise in contending with poverty and consumption, as well as challenging for themselves what truly is “enough”. This is an exercise I feel inspired to repeat in my own context. Also in the chapter on Contending was an honest and needed section calling communities to not only contend with the forces of poverty and evil in our neighborhoods and world, but to remember that contending or “fighting for” the health of our own communities is a primary part of our calling as well. Huckins insightfully names the stages of community growth and development as well as 6 myths of community that can be destructive. Particularly important, he named that true community doesn’t mean everyone always has to agree on everything: “In our communities, we’ve found that the answer isn’t agreeing on everything; it’s finding a way to go forward even when we don’t agree.” (104)

Though Huckins and the NieuCommunities champion Listening as a primary posture, I was a bit disappointed to not hear any first person stories from neighbors and friends of the communities on how they have perceived living near and being served by community members. Some stories of neighbors and those whom Huckins and others have served, along with NieuCommunity Apprentices, are told from Huckins’s point of view and while those stories were powerful I found myself wishing that I heard them from the first person perspective instead of through Huckins’s voice and lens. For such a large community I was also disappointed that the main writers both and all but two or three speakers on the DVD were white males, with few first person women’s voices, and (as far as I could tell) no non-white, non-middle class voices adding to the conversation. Certainly these groups know much about living in community and perhaps have a different perspective and added wisdom that could have only made Thin Places a stronger book. I was also a saddened by the overwhelmingly male language used for God throughout the book. And in the sections directly dealing with the Bible I perhaps hoped for a more theologically diverse and linguistically sensitive Biblical interpretation. I also was unsatisfied with the DVD, which didn’t seem to go any farther than the book, only reiterating some points and introducing us to the faces of NieuCommunities.

Thin Places would be an excellent resource for congregational small groups and individuals just beginning an exploration of intentional community living and what it might mean to follow Jesus into the world, not simply into the church building.  The book offers concrete ideas for not only doing new things for Christ, but also becoming new people and new communities, in new postures, ready to go out and respond to the needs of the world in the name of Jesus Christ.