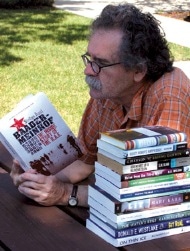 In 2013, we are encouraging our readers to mix up their reading habits, and read (or re-read) classics in addition to new books, such as the ones we review here in the ERB.

Broadly speaking, a classic is any book that is not a new book, or in other words that is worth reading five, ten or even one hundred years after its initial publication. ERB Editor Chris Smith has an article on The Huffington Post website arguing for reading a mix of classics and new books in 2013.

We’ve asked a number of noted writers to pick the classics that they often return to, and we will be running these lists as a weekly feature on our website through 2013.

This week’s post in the series is by John Wilson.

John Wilson is editor of Books & Culture and editor at large for Christianity Today magazine. He received a B.A. from Westmont College in Santa Barbara, Calif., in 1970 and an M.A. from California State University, Los Angeles, in 1975. His reviews and essays appear in the New York Times, the Boston Globe, First Things, National Review, and other publications. He and his wife, Wendy, are members of Faith Evangelical Covenant Church in Wheaton; they have four children.

I couldn’t choose my “favorite” classics—that would be like trying to choose a favorite among my children. The Odyssey and the poems of Emily Dickinson, Hamlet and the essays of Montaigne: each gives us glimpses of the Real, hinting at a wholeness that no single book or shelf of books can begin to grasp.

Here is Julian of Norwich describing one of her “showings”: “In this vision he showed me a little thing, the size of a hazelnut, and it was round as a ball. I looked at it with the eye of my understanding and thought ‘What may this be?’ And it was generally answered thus: ‘It is all that is made.’ I marveled how it might last, for it seemed it might suddenly have sunk into nothing because of its littleness. And I was answered in my understanding: ‘It lasts and ever shall, because God loves it.’ ”

The works I’ve listed below are wildly various, but they all have what Coleridge called the quality of strangeness. That sense of strangeness—of belonging and estrangement at the same time—points to something essential about human beings and the little worlds they make: worlds created by those strange creatures who are themselves both great and small, made in the very image of their Creator yet so weak, so limited in their vision, so fallible in every respect.