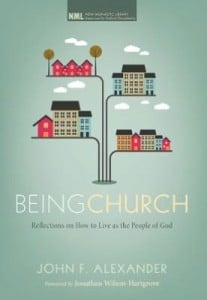 Being Church: Reflections on How to Live as the People of God

Reading John Alexander’s Being Church was an exercise in manic-depression.  I found myself alternatively soaring in the yeses of insight and then wallowing in the despair that so many of my own experiences of church are so far from the church to which Alexander is calling us.  It is a book that will make you long for something better and then ask God, “Why, oh why has the church not lived up to its promise?!”  Alexander has some answers for this of course, and he also offers an outline of the hard work to get us out of Babylon and into the kind of church family to which God has called us.  Alexander knows the church from the inside—he’s seen communities come and go, he grew up in the heart of evangelicalism, his journey is one of trying to find what it was that God meant when God called us to be Christ’s body in the world.

Before getting into what Alexander says, we must first say that the fact of this book’s publication is itself a testament to the kind of church community Alexander is calling us to.  John Alexander was a pastor of Church of the Sojourners—a “live-together” church community in San Francisco.  This is a community whose witness I’ve been watching for several years, seeing them pop up here and there from Chris Rice’s account of the encouragement the church provided to his interracial community in Mississippi in his book Grace Matters to more personal experiences through the teaching of Debbie and Dale Gish and Tim Otto, whom I’ve known through the Ekklesia Project.  It was his church, not John Alexander who saw to it that this book was published, because sadly John Alexander died in 2001 before the book was published. It was Church of the Sojourners with help from Jonathan Wilson-Hartgrove that saw to it that Alexander’s gift was carried on.

Gifts are exactly what Alexander takes to be the primary reality of the church—a community of gift sharing that becomes both a body and a family.  Alexander neatly summarizes this in three points:

All of this could be put into one sentence to say, “The idea is that God is gathering together groups of people to love God, to love one another, to die to self, to become one.” That’s it—that’s what the church is about.  But, Alexander warns, we must realize that the end of the church is not simply to be the church.  Rather “the mission of the church is to be the church for the world” (emphasis his).  That’s our job—not to elect the right emperor, not to vote for the party that has a platform with the highest percentage of agreeable agenda, not to create the most efficient non-profit or mission.  The job of the church, the most significant work we have to do, is to love one another, celebrate and welcome one another’s gifts, and be Christ’s body in the world.

Alexander provides some reasons both historic and contemporary.  The roots, says Alexander, go back to Constantine.  It was Constantine that took the cost out of Christianity, but more so Constantine made the church into an institution beyond the scale of a family.  As the church moved from the small gatherings of the persecuted into the basilicas of Rome it lost both its scale and cost—mega-church is essentially an oxymoron.  In losing its scale it also lost the ability to welcome God’s gifts in the community.  The only gifts that were recognized were the gifts of the new professional clergy—“From that moment the chance to use the gifts of the Spirit for one’s brothers and sisters was all but gone for the average Christian.”  The picture of the church provided in Ephesians became a puzzle.

The second, more contemporary problem is that of FIRE.  FIRE is the fundamental assumptions most Westerners, and increasingly non-Westerners, share about what is good and true.  FIRE is Freedom, Individualism, Rights and Equality.  These four values are deadly for the church argues Alexander—they are what make being the church so difficult in our society.  To give an example of how this is so, take freedom.  “If freedom seems essential to a person, she’ll insist on floating from church to church.  As soon as she gets bored with the music in one church, she’ll change to a church with a better choir, and as soon as a better job beckons, she’ll move to another town.”  Scripture calls us to communities of mutual submission—how can we submit when we are centered on demanding our own freedom?  Alexander goes on to brilliantly show how the fundamental values of Western democracy are antithetical to a functioning church.  He then parses out things such vocation and mission, unbinding them from some of the idols we’ve let confuse our vision.

The next sections of the book begin to show us how to actually live into the people to which God has called us.  Alexander looks at forms that might offer the possibility of living in the church.  He calls us to “stop going to church,” and to rather become the church.  This is something he says will require costly measures—it will require commitment and that will inevitably mean, perhaps, a smaller church.  “Modern people don’t like commitment, and post-modern hate it…As a result, we don’t know one another deeply and can never really learn the meaning of living as the body of Christ,” writes Alexander.  It’s no wonder divorce is a major problem in a church that can’t even ask people to commit to Christ’s body.

Part of the solution, says Alexander, is that we must become “Apaches.”  We must change our whole culture to become a part of a different and new ethnic identity.  “Suppose a white person went to Arizona for a weekend and came back saying he’d become an Apache,” asks Alexander.  What if “the only change you could see was the he work buckskin Sunday mornings and went around telling people he’d become an Apache?”  Crazy, but exactly what so many Christians do.  We are Christians as much as this man is an Apache unless we make radical changes in our way of life, our understandings, and our culture.

The remaining sections of the book explore the theological and practical bases of becoming Apaches—of radically changing our life and culture so that we can enter a new life with a new people.  These steps require us, not surprisingly, to put death to ourselves and to love, love, love one another.  It is a path that requires hard changes like submission and cooperation and unity—hard things for a people formed in FIRE. But if we really believe that Jesus was on to something and that the kingdom of God is a place we want to enter, then this is how we have to do it.  There is good news though.  Spoiler alert! The book’s last line is this: God has done all that matters; we can relax.

Writing in the weeks after the RNC and DNC conventions and seeing so many good Christians get wrapped up in a frenzy of excitement about promises of rights and liberties and change, I’ve longed for someone to say STOP!  This isn’t the kingdom, this hardly a provisional good in expectation of the kingdom!  We should say, “Oh, there’s an election going on?  I was too busy being loved and loving, too busy being joining my brothers and sisters being the church for the world.”  I offer this book to all of my brothers and sisters over the next couple of months.  Whenever you feel the temptation to read the newspaper, to feel your heart swell at some politician’s speech, to look at the polls with excitement, or to post some ridiculous political meme to your Facebook page, pick up John Alexander’s Being Church and read.  Then on Election Day, take communion with your brothers and sisters in Christ.  Print up little stickers with crosses on them that say, “I Communed” or “I Gave Thanks.”  This will save you from the let down of false gods, the disappointment of idols.  Instead you will be joining a group of sojourners who are here, in the words of Stanley Hauerwas, “to make the world the world.”