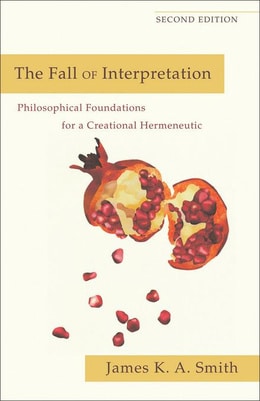 The Fall of Interpretation:

Philosophical Foundations for a Creational Hermeneutic.

James K.A. Smith is one of the most prolific Christian philosophers writing today.  His writing ranges from works on Pentecostalism (Thinking in Tongues) and the Reformed tradition (Letters to a Young Calvinist) to Radical Orthodoxy (Introducing Radical Orthodoxy) and Postmodern philosophy (Who’s Afraid of Postmodernism?).  Smith’s first book, The Fall of Interpretation: Philosophical Foundations for a Creational Hermeneutic, originally written as his master’s thesis at the Institute for Christian Studies in 1995 and published in 2000, has now been re-released in a second edition.  The second edition includes two major additions, “Reconsiderations: An Introduction to the Second Edition” and an additional chapter.

The Fall of Interpretation is, in a sense, a brief on behalf of particularity, an affirmation of difference and plurality as goods inherent in God’s good creation.  It is a celebration of the conditions of creaturehood—conditions that include and demand the inescapability of interpretation (2).

Smith became a Christian in the Plymouth Brethren tradition which “decried ‘the traditions of men’ and thus championed a ‘back to the Bible’ primitivism” (4).  In spite of this background, Smith came to the conclusion that interpretation is inevitable and that all come to texts, including the Bible, out of interpretive traditions.  Smith thus describes The Fall of Interpretation as a “postfundamentalist book” with “just a hint of ‘recovery’” (5).  Smith argues two forms of postfundamentalism exist: emergent and catholic.  Instead of following the path of Peter Rollins’ brand of emergent skepticism, Smith emphasizes “a postcritical affirmation of the particularity of the ‘catholic’ orthodoxy of the Nicene tradition, and of even more specific renditions of that (such as Reformed or Anglican or Pentecoastal streams as particular interpretive traditions within catholic Christianity)” (6).  Smith argues that the first edition was a postfundamentalist work, but did not directly privilege the catholic over the emergent, and sees the catholic trajectory as “more persistently postmodern” (7).  He remedies this with the second edition, in addition to having a greater emphasis on Scripture, revelation, and the church.

The work does not primarily focus on how people practice hermeneutics, but how they view the task of hermeneutics.  He sketches four different models of hermeneutics or interpretation.  Smith not only discusses how these models relate only to the reading of texts, but to all communication.

Smith calls the first model “Present Immediacy.”  Adherents of this model largely stem from a certain segment of evangelical theology associated with “Old Princeton.”  They argue that “the Fall was a fall from immediacy to mediation, from understanding to distortion, from reading to interpretation” (35).  They also argue that redemption restores Edenic immediacy “by the illumination of the Spirit coupled with the perspicuity of Scripture” (36).  Those of this viewpoint often see interpretation as “an inconvenience” and that “God helps us overcome it” (37).  To illustrate how this model functions Smith interacts primarily with Rex Koivisto and Richard Lints.  While Koivisto acknowledges that people do not interpret texts, like the Bible, in a vacuum, he insists that Christians distinguish between their fallible  traditions and interpretations and “the clear teaching of Scripture” (emphasis original) in order to bring about Christian unity (40).  Smith instead argues for the necessity of interpretation.  Lints argues that Christians must come to understand their cultural, traditional, and experiential biases in order to overcome them.  Smith argues that Lints’ understanding makes “being human a sin” (51).

Smith calls the second model “Eschatological Immediacy” or the “‘dim mirror’ model.”  Those who follow this model “emphasize the provisionality and limits of human knowing based on the finitude of existence” (64).  At the same time these figures have an eschatological hope for unmediated immediacy.  This tradition claims as support Paul’s statement in 1 Corinthians 13:12a, “For now we see through a glass darkly [en ainigmati]; but then face to face” (KJV).  Smith argues that Wolfhart Pannenberg, Hans-Georg Gadamer, and Jürgen Habermas adhere to this model.   Smith critiques Pannenberg’s perspective that “creation as created stands in need of redemption” (69).   Smith argues that Pannenberg’s view necessitates the overcoming of finitude and creaturehood in the eschaton and makes humanity guilty for existing.  Smith instead argues that redemption involves a restoration and that humanity should give thanks for their finitude and existence as  “a gift from God” (79).  While Smith expresses his indebtedness to Gadamer’s philosophical hermeneutics, Smith still argues that “there remains a deep monologism that ascribes unity to the Truth (and the Tradition)” (81), which can be seen in his emphasis on the temporal continuity between a text and its reader.  Habermas also envisions a future “ideal speech community, which may even be experienced in the present (kairologically)” (86).

Smith calls his third model “Violent Mediation.”  This perspective rejects the “myth of immediacy or pure reading” (90).  Smith says, “While the mediation and situatdness of human be-ing are recognized as necessary and inescapable conditions of existence, [Martin] Heidegger and [Jacques] Derrida claim these conditions are nevertheless connected to a fallenness that issues in violence” (90).  Heidegger notes the “limits” or “determinate conditions” of interpretation, which “make interpretation possible, while at the same time governing the interpretive possibilities” (93).  A human interpreter thus always interprets from a given locale.  Heidegger discusses the role of interpretation not only in special disciplines, but in life as a whole.  “To be-in-the-world is to interpret” (95).  Heidegger believes that human relationships “are constituted by a primordial violence and domination” (98).  Hermeneutics in itself is naturally violent as well.  Smith critiques this perspective, arguing that being-in-relation is “a crucial aspect of being authentically human” (104), and thus part of the goodness of creation.  Smith thus follows John Milbank in advancing an “ontology of peace.”

Derrida also argues for the inherit violence in interpretation that stems from the origin of language and intersubjective relations.  Smith critiques this understanding because he sees human be-ing as “essentially interrelational,” which makes intersubjectivity not inherently violent but “good” (131).  Smith thus sees interpretation as “a way of connection, a way of being-with that is essential to be(com)ing human” (133).

Smith’s fourth model, the one which he supports, he calls a “Creational Hermeneutic,” which he at times calls “creation-pneumatic.”  Like the “Violent Mediation” model, Smith argues that interpretation is a necessity for humanity, but Smith roots interpretation not in a fallenness or a necessity of violence, but in “an Augustinian affirmation of the goodness of creation” (141).  While the early Augustine (through the Confessions) sees interpretation as part of the fall, Smith notes the conflict present with this line of thought because of Augustine’s emphasis on the goodness of creation.   Smith thus seeks to deconstruct Augustine “on his own terms” (156) in order to develop a creational hermeneutic.

Smith sees hermeneutics as “constitutive of creaturehood” and thus “fundamentally good and not necessarily violent” (159).  The conditions for hermeneutics and for life in the world are “intersubjectivity and finitude” (160).  Smith does not see these conditions as weaknesses, but as a part of what it means to be a creature in a given situation and interpretive tradition.  Smith’s understanding of hermeneutics thus allows for “the plurality and revisability of interpretation” (168).  Following Augustine, Smith thus says Christians should humbly allow for a “plurality of truths within the Scriptures” (169).  Smith’s strong affirmation of the goodness of creation also gives him a firmer ground to critique violence and oppression in the world and see the times in which interpretation can be violent.  In particular, he points out with Augustine the need to understand the sum of Scripture as the command to love God and neighbor.

In the new chapter added for the second edition, “Limited Inc/arnation: From Creation to Ecclesia,” Smith interacts with critiques of Derrida by John Searle and some Christian thinkers with regard to issues like authorial intent.  Some evangelicals, like Kevin Vanhoozer, argue Derrida’s views on semiotics make it impossible for “texts to communicate the intentions of their authors” (201–202), which in turn makes interpretation arbitrary.  Smith concludes that Derrida does not question whether communication can take place, but asks to what extent can an author’s intentions be communicated.  While Smith does not call himself a “Derridean,” he sees in Derrida some helpful tools for developing a creational hermeneutic.  Smith shows that in Derrida’s thought, context remains central to understand any given text.  A context, however, can never be fully determined because of the absence “of senders from receivers” and “also of senders from themselves” (213).  Smith says that “communities ‘fix’ contexts, and contexts determine ‘meanings’” (215).  Smith thus says that an author’s intention can only be seen in “a communal discernment, insofar as the community ‘saturates’ a context” (216).  This discernment takes place with both the presence and absence of the writer.  For Christians, the church catholic is the community in which Scripture is interpreted and performed in a special way as the Spirit indwells readers.

Shaun C. Brown is Associate Minister of Youth at Central Holston Christian Church in Bristol, TN, where he lives with his cat Tonks.