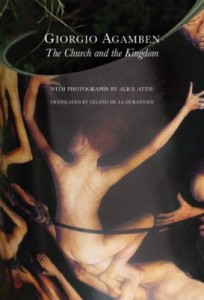 A Constant State of Emergency?

The Church and the Kingdom

The Church and the Kingdom is the manuscript of a lecture (or more properly, a homily) given at Notre-Dame Cathedral in Paris in the presence of the Bishop of Paris and other high-ranking church officials. The discourse is exceedingly brief, yet in the space of these few pages Agamben accuses the Church of having chosen temporal, political power over its original vocation to be God’s kingdom on earth. Specifically, he argues that the Church has embraced the apocalyptic time of the world over the “messianic time” which characterizes the kingdom of God. These terms require some explanation.

According to Agamben, the people of God are called to leave the world. Characteristically, he begins with a philological observation. He contrasts the Greek term paroikousa (‘sojourning’) in Clement of Rome’s address to the Corinthian church with the term katoikein, “to dwell as a citizen.” Christians are, to use Peter’s words, “wayfarers and foreigners” in the world (1 Pt. 2:11). Thus, the Church of the New Testament and of the Fathers understood itself to be a pilgrim people without a permanent residence in the world. This tradition is preserved in the term ‘parish,’ which derives from the Greek paroikousa, a word which likewise applies to resident aliens. To put Agamben’s idea in Yoder’s words, exile was normative for early disciples of Jesus.

Rather than apply this distinction ethically, as Yoder does, Agamben considers it in terms of time. The difference between sojourning and living as a citizen, he insists, is essentially a difference of how time is experienced. Worldly institutions perceive time progressively. Each moment points forward toward an anticipated climax, which is constantly deferred. Agamben relates this to Paul’s enigmatic phrase in 2 Thessalonians 2:6-7 “that which restrains” (to katechon), interpreting it as that which “maintains and ceaselessly defers the end along the linear and homogenous line of chronological time” (35). Even though the end is anticipated, it is endlessly deferred, so that the kingdom of the world literally knows no end. In this lecture, he does not develop this idea in detail; however, from his political writings it is clear that he is referring the tendency of modern nation-states to continuously invent crises in order to legitimate their power. The State is constantly in a “state of exception”, or emergency, in which the powers that be (presidents, prime ministers, and parliaments) are expected to save the day. Yet as soon as one emergency is resolved, another appears, requiring citizens once again to hand over their powers to the State’s authority, ostensibly for their own security. The cycle is endless, yet, as Agamben pointedly observes, “according to Christian theology there is only one legal institution which knows neither interruption nor end: hell” (41). This sort of infernal authority which characterizes modernity is impotent: “nowhere on earth today is a legitimate power to be found.” To the extent that the Church grounds its authority in the ever-deferred return of Christ, it too has lost its legitimacy. This apocalyptic experience of time with its emphasis on the future negates what is at hand, namely the kingdom of God which Jesus proclaimed.

The time of God’s kingdom, which Agamben refers to throughout his works as “messianic time,” emphasizes the “time of the end” rather than the “end of time.” That is, the Church does not tick off time until the great climax of Jesus’ return (despite the best efforts of some Christians), but it recognizes ho erchomenos, “‘he who comes’ – that is, he who never ceases to come.” Each moment of time is experienced in relation to the messiah (never capitalized for Agamben, who says very little about the identity of the christ) in whom history has already come to an end. Messianic time is liberating and transformative, because it allows us to see things as they already are rather than as how they will be on some future day. Ordinary things, which he refers to as the “penultimate,” are redeemed, because they are seen as they are, not as they should be. This is the time of the sojourner, of the one not invested in the future of the kingdom, but rather in the present moment. “Living in this time, experiencing this time, is thus not something that the Church can choose, or choose not, to do. It is only in this time that there is a Church at all” (26). In scripture, this time is called kairos: “The time (kairos) is fulfilled, and the kingdom of God has come near; repent, and believe in the good news.” (Mk 1:15; cf. 1 Cor 7:29).

Agamben made his career as a philosopher and political theorist, but in the last decade he has given considerable attention to theological issues. Most of the issues raised in this little work are discussed elsewhere, most notably in his brilliant commentary on Romans, The Time That Remains (Stanford, 2005), yet The Church and the Kingdom is the clearest and most concise statement of his theological views so far. In the past he has offered insightful interpretations of Paul’s writings, yet here for the first time he directly engages and challenges the Church. While his interlocutor is here the Roman church, he is clearly addressing the Church catholic, which is in danger of being “swept away by the disaster menacing every government and every institution on earth” (41). Agamben’s philosophical reflections on temporality and messianic time present a new critique of the Constantinian Church which has the potential to reinvigorate and redirect the conversation concerning the relationship of the Church and the State.

This book ends with a helpful afterward by Leland de la Durantaye, Giorgio Agamben’s translator and chief English interpreter. De la Durantaye clarifies obscure passages and provides references to Agamben’s other theological works. The book is also punctuated with photographs by Alice Attie. All the photographs represent paintings of classic Christian iconography, but fragmented, twisted and suspended to mark grief and rupture. They are a fitting accompaniment to Agamben’s text.