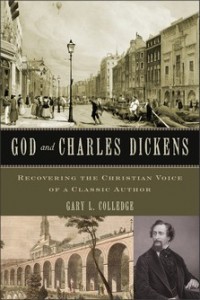 Probing the Faith of Dickens.

God and Charles Dickens: Recovering the Christian Voice of a Classic Author

During an online discussion of A Tale of Two Cities, my favorite novel, I was startled to find many of the other participants taking it for granted that the book’s author, Charles Dickens, was not a man of faith.

The truth is, I’ve often seen that assumption made before, so it shouldn’t have been such a surprise. And yet it always is, every time I come across it. It’s very hard to understand this belief, when a careful study of both Dickens’s works and his life reveal what Dr. Gary L. Colledge, an adjunct professor at Moody Bible Institute and Walsh University, calls “a thoroughgoing Christian worldview.”

This is precisely why Colledge’s work has been among the most valuable contributions to Dickens scholarship in recent years. His new book, God and Charles Dickens: Recovering the Christian Voice of a Classic Author, focuses on a crucial aspect of Dickens’s life and work that has been sadly neglected of late. Without an awareness of this aspect, Colledge rightly believes, we are hampered in our understanding of  Dickens’s work.

In his previous book, Dickens, Christianity, and ‘The Life of Our Lord,’ Colledge focused on one particular work, a life of Jesus written by Dickens for his children, and on what it taught us about the great author’s faith. Now, he broadens his scope considerably, taking in Dickens’s life and works as a whole. At the same time, he departs from the formal and academic tone of his earlier book, and addresses a more general audience. The resulting book will appeal to and enlighten Dickens readers at all levels, from the casual fan to the serious scholar.

Colledge gets right to the point very early in the book: “The Christian nature of his work is straightforward and conspicuous. And it is no wonder, because Dickens was deliberate and intentional in expressing his Christian convictions in his work.” It’s a bold statement, but Colledge spends the rest of God and Charles Dickens backing it up, thoroughly examining what both Dickens himself and those around him had to say about his own faith and its impact on his writing.

It’s true, as he points out, that Dickens’s Victorian-era Anglicanism had significant differences from modern evangelicalism, and many evangelical readers today would probably have quite a few theological quibbles with him. But it is also true that, notwithstanding a brief flirtation with Unitarianism when he was in the thirties, Dickens understood and held to the fundamental doctrines of the Christian faith, as they have been taught by the church throughout its history.

Even a cursory reading of his work shows just how deep an impression these doctrines made on his thinking. From Oliver Twist to A Tale of Two Cities to Great Expectations, we see themes of repentance, atonement, and conversion emphasized again and again. In particular, Colledge spends considerable time on how the characters of Mrs. Clennam and Amy Dorrit in Little Dorrit respectively represent the biblical ideas of judgment and grace, and how these ideas play out in their own lives and affect the lives of others.

It’s highly unlikely that a man who was merely paying lip service to the popular beliefs of his time, as many critics today contend, would allow those beliefs to permeate his works to such an extent. How, one cannot help but wonder, could such a man have written the beautiful redemption scenes for Sydney Carton in A Tale of Two Cities, or included Pip’s determination to share with the dying convict Magwitch “what I knew he ought to hear” in Great Expectations? These scenes, and many others like them that are scattered throughout the body of Dickens’s work, shine with sincerity and reverence. Their presence hints that it is far likelier that the aforesaid beliefs actually informed and shaped Dickens’s own thinking.

Colledge drives this point home by quoting from an 1861 letter in which Dickens told the Reverend David Macrae, “. . . One of my most constant and most earnest endeavours has been to exhibit in all my good people some faint reflections of the teachings of our great Master, and unostentatiously to lead the reader up to those teachings as the great source of all moral goodness. All my strongest illustrations are derived from the New Testament; all my social abuses are shown as departures from its spirit; all my good people are humble, charitable, faithful, and forgiving. Over and over again, I claim them in express words as disciples of the Founder of our religion; but I must admit that to a man (or woman) they all arise and wash their faces, and do not appear unto men to fast.”

So Dickens’s critiques of the church were based not on disagreement with what it stood for, but rather, on his belief that it did not stand strongly enough for these things. Faith without works—specifically, those who professed Christianity without making any effort to help the needy—was anathema to him, and he diligently tried to counter that trend and set a better example, both through his own extensive charitable efforts and through the themes that permeated his writing. To call Dickens anti-religious because he criticized the church is such a simplistic and shallow reading of his character, that one suspects those who do this of seeing only what they want to see.

As for those who point to Dickens’s eventual separation from his wife as proof that he was not a sincere Christian—and their name is legion—Colledge deals with their argument simply and sensibly. He points out what many of our literary gossips ignore: that we actually know very little of what happened. “Much of what is claimed as fact,” he reminds us, “is instead speculation and sometimes borders on sensationalism.” While he does not defend Dickens’s behavior during that sad episode, he acknowledges that “even human failure” cannot drown out the God-given voice with which Dickens still speaks to us today. And Gary Colledge makes a very convincing case for the authentic Christianity of that voice—a case that will be difficult for any honest critic to ignore.