A Review of
Why Read Moby Dick? 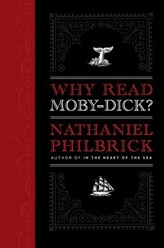 I must confess: I am prone to the spell of literaryspeak. This language is always a mixture of poetry, history, and philosophy. But inevitably, this lettered language revels in the magic of fiction made real. In Why Read Moby-Dick, Nathaniel Philbrick is fluent.

In this small treatise, Philbrick broadly claims Moby-Dick to be “the greatest American novel ever written” (2). Another confession: even with a Literature degree from an urban university, I have never read Moby-Dick. So, while waiting for Philbrick’s book in the mail, I began the hefty novel. I was soon bound by its spell. Philbrick had already accomplished his goal, which is to have more people read his favorite classic. And now, after savoring his argument and his book, do I want to finish Moby-Dick?

By saying earlier that Philbrick is fluent in a delicious literary language, this is what I meant: “And so it ends, this little sidebar of miraculous prose, one of many that Melville scatters like speed bumps throughout the book as he purposely slows the pace of his mighty novel to a magisterial crawl” (21). Even as Philbrick revels in Melville’s excitingly languid style, he mimics it. From what I have read of Moby-Dick, the poet in me has become insatiate for more tangy and bending Melville sentences. Philbrick showcases these perfectly for those who long to fill and refill their mind’s ear with poetic prose.  He even has a chapter entitled “Poetry” where he quotes this description of steam coming off a man’s head: “a curious involved worming and undulation in the atmosphere over my head…while plunged in deep thought, after six cups of hot tea in my thing shingled attic” (75). As Philbrick says, “Good poetry is not all about lush and gorgeous words. It’s about creating an emblematic and surprising scene that opens new worlds” (73).  My favor for Philbrick’s work grew exponentially after he paid homage to the most important part of literature: how it is written. Nothing is communicated well if it does not have a poetic ring to it.

Click the link below for Page 2 to continue reading…