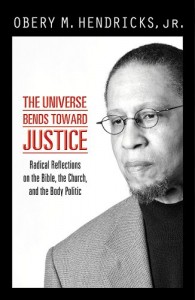 “Illuminating the costly way of Jesus in our world”

A Review of
The Universe Bends Toward Justice
:
Radical Reflections on the Bible,
the Church, and the Body Politic
Obery M. Hendricks, Jr.
Paperback: Orbis Books, 2011.
Buy now:  [ Amazon ] [ Kindle ]

A couple miles from my home on Chicago’s South Side is the burned out shell of Pilgrim Baptist Church. As impressive as its building was before a fire in 2006, it is what happened inside the sanctuary that sealed the congregation’s reputation.  Under the direction of long-time music minister Thomas Dorsey the church is credited with birthing gospel music in the 1930s.  Driving by the abandoned building today it would be easy to miss the influence this historic African-American church has had on global Christianity.

Last summer, less than four miles north of Pilgrim Baptist, members of the Occupy Wall Street were arrested as they attempted to set up camp in Grant Park.  Detractors complained that the protestors were unclear about their demands, but even casual observation revealed their shared frustrations, including the growing income disparity.  The protests brought together a diverse crowd – blue color union workers, community organizers, and idealistic young people –united loosely by their moral outrage about economic injustice.

The seeming unrelated nature of these two places – the birthplace of Gospel music and the gathering place for protest against economic injustice – is Obery M. Hendricks’s location in The Universe Bends Towards Justice: Radical Reflections on the Bible, the Church, and the Body Politic.  Labeling the book’s contents “reflections” allows the author, a professor at New York Theological Seminary, to include apparently unrelated essays under the loose heading of justice.  But to miss the connection between Gospel music and economic injustice is to miss the work Professor Hendricks does in these pages.

Click the link below to keep reading on Page 2…