A Review of
The Triumph of Christianity:
How the Jesus Movement Became
the World’s Largest Religion 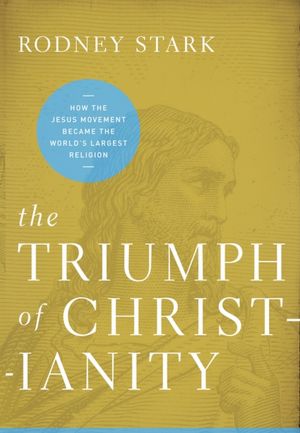 On the surface, this big book by Rodney Stark might seem like a conventional historical account. Written by a seasoned scholar, encapsulating the main points of his life of research, it has all the markings of a magnum opus, the summary findings of a career spent doing hard historical work.

In one sense, this superficial assessment is correct. Stark surely is a senior figure with a brilliant career. Though not actively religious, he made his mark in the world of scholarship in the early- and mid- 1980’s with his work on the appeal of religious movements for individuals and social groups. However, in a more important way, to judge this book as merely a conventional summary by a mature scholar would be to grossly underestimate it.

What Stark excels in, and what this book is full of, is a kind of scholarly iconoclasm. Stark comes off as a contrarian throughout. In fact, he appears to positively relish his role as a debunker of conventional wisdom.

Do you think that Christianity grew at a pace only a miracle could explain? Or that it was mostly a religion of the rural poor? How about the idea that it set back the cause of women, forever subjecting them to male headship? Or the notion that it was the Roman emperor Constantine whose conversion to Christianity finally cemented its place in Roman culture? Were the crusades the work of bored, greedy Europeans, aggressively encroaching on peaceful native Muslims? Were the middle ages a period of darkness, intellectual obscurantism, opposition to scientific and philosophical breakthrough? Was the Spanish Inquisition a sordid and brutal chapter in the history of the Church, best disowned? Does religious pluralism threaten the existence of American Christianity? Is Christianity dwarfed globally – especially in Africa – by the dominance of Islam or Eastern religious mysticism? To each of these questions (and this is just a sampling), Stark provides the most surprising answers. His favorite formulation, which nearly every chapter begins with, is something like, “This is what most people have heard and believe to be true. And it is utterly wrong.”

Click on the link below to continue to page 2…