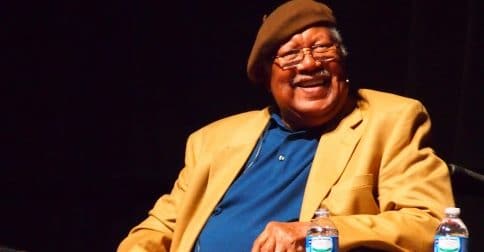 Ernest Gaines, one of America’s most underappreciated novelists, died yesterday at the age of 86. We remember his life and honor his work with this obituary …

Ernest James Gaines (January 15, 1933 – November 5, 2019) was an American author whose works have been taught in college classrooms and translated into many languages, including French, Spanish, German, Russian and Chinese. Four of his works were made into television movies.

His 1993 novel, A Lesson Before Dying, won the National Book Critics Circle Award for fiction. Gaines was a MacArthur Foundation fellow, was awarded the National Humanities Medal, and was inducted into the French Ordre des Arts et des Lettres (Order of Arts and Letters) as a Chevalier.

Gaines was among the fifth generation of his sharecropper family to be born on a plantation in Pointe Coupee Parish, Louisiana. That became the setting and premise for many of his later works. He was the eldest of 12 children, raised by his aunt, who was crippled and had to crawl to get around the house. Although born generations after the end of slavery, Gaines grew up impoverished, living in old slave quarters on a plantation.

Gaines’ first years of school took place in the plantation church. When the children were not picking cotton in the fields, a visiting teacher came for five to six months of the year to provide basic education. Gaines then spent three years at St. Augustine School, a Catholic school for African Americans in New Roads, Louisiana. Schooling for African-American children did not continue beyond the eighth grade during this time in Pointe Coupee Parish.

When he was 15 years old, Gaines moved to Vallejo, California, to join his mother and stepfather, who had left Louisiana during World War II. His first novel was written at age 17, while babysitting his youngest brother, Michael. According to one account, he wrapped it in brown paper, tied it with string, and sent it to a New York publisher, who rejected it. Gaines burned the manuscript, but later rewrote it to become his first published novel, Catherine Carmier.

In 1956, Gaines published his first short story, The Turtles, in a college magazine at San Francisco State University (SFSU). The next year he earned a degree in literature from SFSU. After spending two years in the Army, he won a writing fellowship to Stanford University.

From 1981 until retiring in 2004, Gaines was a Writer-in-Residence at the University of Louisiana at Lafayette. In 1996, Gaines spent a full semester as a visiting professor at the University of Rennes in France, where he taught the first creative writing class ever offered in the French university system.

In the final years of his life, Gaines lived on Louisiana Highway 1 in Oscar, Louisiana, where he and his wife built a home on part of the old plantation where he grew up.  He had the church he grew up with moved to his property.

Gaines died from natural causes at his home on November 5, 2019.
(via Wikipedia)

Ernest Gaines was a fellow student with Wendell Berry at Stanford, under the renowned novelist Wallace Stegner. The two remained friends until the end of Gaines’s life.