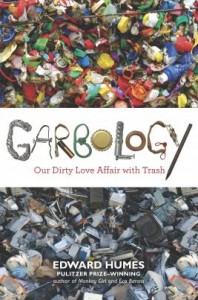 A Society Founded on Trash and Waste

America has a problem with trash. In his book, Garbology: Our Dirty Love Affair with Trash, the Pulitzer prize-winning author Edward Humes lays out our trash and asks us to sort through it, examining how we came to be so wasteful.

Throughout the day, Americans generate trash. Paper towels, cereal boxes, soda bottles, mail, ink cartridges, dog food bags, batteries, cheap toys, old clothes and fast food containers are just a few of the many things we discard. We put our junk in a trash bag and like magic, it disappears.

This is not the case for a small percentage of Americans known as hoarders. Hoarders and Hoarding: Buried Alive are popular shows on the television network TLC.  If you have seen or heard of these shows, you are aware that some people have trouble getting rid of their trash. Stacks of boxes, bags, clothes and trash fill their homes; physical signs of serious psychological problems. Yet, Humes says that these hoarders, sufferers of disphosophobia, point out a problem we suffer in America,”the amount of junk, trash and waste that hoarders generate is perfectly, horrifyingly normal. It’s just that most of us hoard it in landfills instead of living rooms, so we never see the truly epic quantities of stuff that we all discard.” (4) Through examining reports from the U.S. government, independent researchers and businesses, Humes presents the reader with an alarming number – 102 tons. That’s the amount of trash the average U.S. resident will generate during his lifetime.

Looking at trash through historical, environmental and commercial lenses, Humes helps readers to see how we’ve gotten to the point of the “102 ton legacy” and looks at ways trash is being handled in the U.S. and in parts of the world that are more proactive about waste.

Humes attempts to answer three questions. What is the nature and cost of the 102 ton legacy? How do we have so much trash while barely aware of it? What do we do to correct the problem? In the first section, Humes takes a look at the history of trash, a problem that goes hand in hand with civilization. The Greeks dealt with trash issues 2500 years ago, creating the first municipal dump in history in an attempt to reduce the amount of trash thrown in the streets. Ever since then, we’ve been trying to figure out what to do with our trash. Romans washed some of it down their advanced sewage system. Some cities built on their trash, raising the elevation of the city. Plague and cholera thrived because of poor handling. Cities had hogs that roamed the streets eating trash. In 1894, Alexandria, VA residents sank barges on the Potomac to prevent the importing of trash from other cities. People have burned their trash, buried their trash and shipped it out of state. “America’s two highest volume exports to China are paper waste and scrap metal.” China’s number one export to America is computer equipment (11). Our trash is furniture, clothing, wood, boxes, bottles, bags, carpet, newspapers, appliances and mail. It does not biodegrade the way we hoped. It sits, it rots and it gets in our water system. Tons of it are in the ocean. Plastic is now ubiquitous, moving from 0.4 per cent of waste in 1960 to 11 percent in 2000 (65). In 2011, New York City spent more than $300 million dollars just transporting their trash –12,000 tons a day. Our trash costs are huge.

So how did our system of waste disposal get to be such a mess? Humes looks at the economics of this waste and the emphasis on buying more than we need and throwing it away before we’re done with it. An engineer by training, J. Gordon Lippincott, became a marketing and design guru in the 1940’s. Humes quotes him as a blatant representation of the modern view:

“Our willingness to part with something before it is completely worn out is a phenomenon noticeable in no other society in history…it is soundly based on our economy of abundance. It must be further nurtured even though it runs contrary to one of the oldest inbred laws of humanity, the law of thrift” (59).

Certainly, trash has been a problem for society for a long time, but trash has now become a bigger problem because we have systems that require it. In the U.S., 1 in 6 trucks is for trash (6). Scissors are occasionally packaged in plastic so difficult to open that you need a pair of scissors to get into them. Vegetables at the grocery store are shrink-wrapped. The 102 ton legacy will probably expand if we let the market provide solutions. As the writer Dorothy L. Sayers points out, “A society in which consumption has to be artificially stimulated in order to keep production going is a society founded on trash and waste, and such a society is a house built upon sand” (17).

Fortunately, in Garbology, Humes provides some suggestions for ways to improve our situation. He looks at the places in the United States where trash is recycled, reused and reduced. Lee County, Florida “recycles or composts half its trash, and burns the rest to make enough electricity to power thirty-six thousand homes” (235).  Portland, Oregon makes good use of 59 percent of its trash through recycling, composting and burning it for energy. Connecticut residents make only about 5.5 pounds of trash each day, making their legacy a “mere” 78 tons. Humes also looks at international success stories like Germany and Denmark, where dealing with trash has become a long range goal, and discusses what steps might be possible in America.

Edward Humes knows that challenging the status quo of consumption and trash creation is difficult, but he discusses how this challenge is already being addressed and small ways in which we can reduce our trash legacy. Though Garbology can feel a little dismal when Humes provides the data that points to the giant piles of trash we are helping to generate, he manages to encourage readers to roll up their sleeves and get busy on ways to reduce our 102 ton legacy.