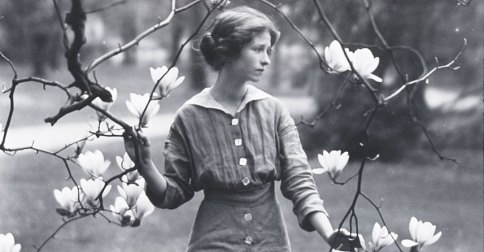 October 19 marks the anniversary of the death of poet Edna St. Vincent Millay …

Edna St. Vincent Millay (February 22, 1892 – October 19, 1950) was an American poet and playwright, whose poems received the Pulitzer Prize for Poetry in 1923, the third woman to win the award for poetry,  and was also known for her feminist activism. The poet Richard Wilbur asserted, “She wrote some of the best sonnets of the century.” (via Wikipedia)

We honor the occasion with five excellent poems by her…

The trees along this city street,
Save for the traffic and the trains,
Would make a sound as thin and sweet
As trees in country lanes.

And people standing in their shade
Out of a shower, undoubtedly
Would hear such music as is made
Upon a country tree.

Oh, little leaves that are so dumb
Against the shrieking city air,
I watch you when the wind has come–
I know what sound is there.