The Women Beyond Wesley:
A New Look at Methodist Origins

Mothers in Israel: Methodist Beginnings Through the Eyes of Women
Donna Fowler-Marchant

Even today, if you visit the website for Cokesbury, United Methodism’s venerable bookseller, you’ll see an image that has shaped Methodist perceptions of their heritage. It’s a circuit riding preacher on horseback reading a book. The figure is studious, solitary, and undoubtedly male.

There is, of course, more to the story of the eighteenth-century Methodist movement, but this image and its progenitor, the inescapable John Wesley, effectively obscure the larger picture. Try to envision in your mind’s eye thousands of lay-led classes and bands meeting across Britain and the American hinterlands and the imagination falters, but a lone horseman fording a swollen creek on a stormy night with a saddlebag full of Bibles and publications? Now that’s cinematic.

So what if we were to see the origins of Methodism through other eyes—say those of women? What would we notice? As Donna Fowler-Marchant tells it in her new book, we might see a generation of people innovating with all the ingenuity and boldness of Wesley while at the same time drawing on older, more communal forms of female spirituality. We might also reclaim a broader understanding of the Wesleyan tradition in which the leadership of women is not a novelty of recent vintage, but part of its warp and weft from the beginning.

Maybe even before the beginning. Fowler-Marchant starts her history with Susanna Wesley, mother to John and Charles, who provides a model and inspiration for Methodist women to follow. Susanna, a daughter of a dissenting pastor, was a strong-willed and independent thinker who was clearly the more stable and resourceful of the Wesley parents. While her Anglican clergyman spouse, Samuel, was burdened with an “improvidence with money and implacable sense of righteousness [that] caused much heartache for them all” (11-12), Susanna became a strong religious leader both within and outside her family.

On the home front, Susanna was unafraid to confront her husband on matters of conscience and developed for her many children, sons and daughters, a “loving though rigorous educational and religious training” (9). Within the larger parish, particularly during Samuel’s frequent absences, Susanna became a parish leader. When Godfrey Inman, a rather inept curate, filled in for Samuel at the Epworth parish, Susanna supplemented his meager spiritual offerings with a Sunday evening gathering that became a point of epistolary contention when Samuel got wind of it. Susanna, noting that they had as many as 200 attending her gatherings, admitted that it looked unusual but then “so does almost everything that is serious or that may in any way advance the glory of God or the salvation of souls, if it be performed out of a pulpit, or in the way of common conversation” (29).

We see in this story, as the author notes, a harbinger of John Wesley’s defense of his own unorthodox ministry as an Anglican priest without a parish, preaching in coal pits and next to the standing cross in market squares. We also see the developing model of a Methodist female leader, gathering and nurturing a community and engaging in practices that would eventually be recognized for what they no doubt were—preaching.

Wesley took a path of torturous logic on his way to affirming women preachers. When challenged that some of his female adherents were doing something that looked very much like preaching, Wesley would counter that they must be doing something else. When Sarah Crosby, “often considered the first woman Wesley every authorized to preach” (91), complained to Wesley about the resistance she was facing to her public speaking, he advised her to respond, “You lay me under a great difficulty. The Methodists do not allow of women preachers; neither do I take upon me any such character. But I will just nakedly tell you what is in my heart” (93).

For the revival leader, ever ready to acknowledge God’s warrant for his controversial decisions to preach outdoors, commission preachers, and ordain bishops for the new American Methodists, women preachers were another of God’s innovations and who was he to stand in the way? The author quotes Leslie Church, who remarked about Wesley, “It was impossible for him to forbid or discountenance [Sarah Crosby’s] work, but it was hard for him to acknowledge it” (100).

At the center of Donna Fowler-Marchant’s book is the figure of Mary Bosanquet (later Fowler). Bosanquet had an extraordinary career that took her from being the spiritually restless child of privileged, disapproving parents to the center of a network of Methodist women leaders who supported each other’s ministries and occasionally lived communally. A brief marriage to the parish priest Madeley moved her locus of ministry, but after his death, she continued to be a leader among the circle of female friends.

Bosanquet’s spirituality recalls features of women mystics of the medieval era, and they broaden the sense of what constitutes a Methodist spirituality. She experienced intense religious struggle that included devising tests of her faith that involved cutting herself to see if Jesus would stop the bleeding. She also wrote in her journal about a vivid dream in which she was given a child to nurse and discovered, miraculously, that she had a flow of milk that would suffice. “Bring me all the children in the world for I have milk enough for them all,” she cried out in the dream—a sign of assurance for her that she had all the gifts she needed for God’s work.

Both of these experiences were censored by the male Methodist editor who was asked to publish her autobiography following her death. As the author notes, his “evident discomfort with this vivid image of a nursing mother along with his interest in portraying Mary as a model of female modesty and Methodist piety led him to sanitize her story by removing these down-to-earth references to her sexuality. In doing so he not only rendered her less human, he critically downplayed her sense of vocation as a woman who found great comfort and encouragement from her dream of a very feminine experience. (75)

“Mothers in Israel,” a biblical reference to the prophet Deborah, became a revered sobriquet in Methodist circles and was certainly applied to figures like Mary Bosanquet and Sarah Crosby. Donna Fowler-Marchant, a clergy person in the United Methodist Church, uses the term for this book, Mothers in Israel: Methodist Beginnings Through the Eyes of Women. But the picture of Methodist women in this early period is far more than maternal. It’s also much more communal than the lone horseman legacy embedded in the Cokesbury logo. Fowler-Marchant’s conclusion after considering these Mothers in Israel is a bit elegiac but earned:

“Their obedience to God pushed the boundaries of accepted behavior for women, challenged the expectations of a woman’s place in public life, brought the gospel of Jesus Christ to rowdy people in unconventional places, and paved the way for the eventual ordination of their spiritual daughters. To them, we owe a debt of gratitude we cannot pay — for their holy boldness, their stubborn obedience, their honest self-appraisal, and their wise spiritual counsel to the people called Methodists.” (154) 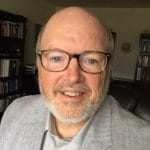 Alex Joyner is a pastor and writer currently serving First United Methodist Church in Charlottesville, Virginia. He is the editor of Heartlands [ alexjoyner.com ] co-author of Living Faithfully: Human Sexuality and The United Methodist Church, (Abingdon, 2019), and his most recent essay “The Silence of No-One’s Land” was published in Streetlight Magazine.