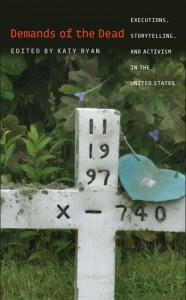 Are We Demeaned by the Death Penalty?

Demands of the Dead: Executions, Storytelling, and Activism in the United States

All Western Democracies, and most countries in the world, have abandoned the Death Penalty for even the most egregious of crimes. The United States, however, persists with the practice. The only countries today where children can be sentenced to death are Saudi Arabia, the Congo, Iran, Pakistan, Yemen, Nigeria and the United States. And in the United States, the death penalty is deeply rooted in our history of slavery, racial oppression and violence. The rate for imprisonment of black men in America is determined to be five times the rate for imprisonment of black men in South Africa, during apartheid.

Demands of the Dead, edited by Katy Ryan, attempts to expose these figures, but most powerfully, to also go beyond statistics and give a voice to those who are on death row or have been. Yet, the statistics are staggering, and Ryan and her contributors are not shy in exposing the racial inequality inherent in the death penalty and, as a book of literary criticism, critiquing those works of literature that address the death penalty and do not give voice to this reality. Ryan informs us in her own essay State Killing, the Stage of Innocence and The Exonerated: “The majority (79 percent) of those on death row were convicted of killing a white person, even though, according to the U.S. Bureau of Justice Statistics, black Americans constitute more than half of all murder victims.” (261) Furthermore, she informs us that, while the race of the victim is the most telling indicator of unequal sentencing, still “42 percent of people on state death rows, and 59 percent of those on federal death rows, are black and overwhelmingly male. These percentages…need to be contrasted with the percentage of the population who are black men—approximately 6 percent.” (262) Demands of the Dead exposes these inequalities and more, narrates the history of the death penalty in the United States and the methods of execution and celebrates the writers, inmates or free, who have contributed to a body of literature that “contributed to a literary record that has not responded with bored resignation to state killing.” (2)

Demands of the Dead opens with the personal narrative of Willie Frances, sentenced to die in Louisiana in 1946, at 16 years old for the murder of a Cajun pharmacist he worked for. During the trial, which lasted only two days, no witnesses were called for the defense, and the all-white jury quickly convicted Willie. Willie Frances is known today as the only survivor of the Electric Chair, and his account, spoken between his first electrocution attempt and, after loosing an appeal, the second that would take his life, recalls his childhood, time in prison and the sensations of being electrocuted and waking up to find he is alive. Willie’s account joints the accounts and poetry of other death-row inmates, including Steve Champion (now Adisa Akanni Kamara) and Anthony Ross (now Ajani Addae Kamara). I found these personal narratives fascinating, enlightening and redeeming. They are accompanied by essays of literary criticism, or from the people who have worked closely with these inmates, attempting to give them a voice in the outside world.