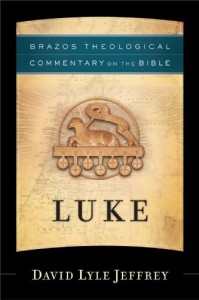 Leading us into the Sacred Story of Self-giving Love

The commentary is an indispensable tool for the study of the scriptures.  Even those trained in Greek, Hebrew, and well-versed in the textual apparatus will eventually visit a commentary or two.  Brazos Theological Commentary has, in my opinion, offered a breath of fresh air to the sometimes stale academic air of commentaries.  The newest volume in the series is Luke by David Lyle Jeffrey.  I have often mined various commentaries, not looking for critical explanation of the text as much as some insight about a particular doctrine that emanates from it.  Yet rarely do authors venture deeply into those issues.  Instead commentaries tend toward dry textual criticism (not that there is anything wrong with that).  I think some scholars eschew doctrine in their work because it is assumed to be outside the text or even obscuring to the text.  The Brazos series (Luke in particular) is fundamentally different because these commentaries “are born out of the conviction that dogma clarifies rather than obscures.”  This, of course, does not mean there is no textual criticism – there is plenty – but paired with hard Greek work is also history, tradition and theology.  This makes the commentary not only a nice read, but a helpful tool for the teacher, preacher, scholar and layperson.

Jeffrey’s break down of Luke is novel.  He breaks the book into theological rather than textual segments – though these are not necessarily at odds.  He favors the way in which Luke shapes the story of Jesus into discipleship and social reconstruction within the framework of his renewed community.  Jeffrey’s training as a literary scholar shows through in his break down (and reading) of the text.

I found this refreshing because in taking a more canonical approach I felt further engrossed in the actual story of Scripture, rather than, an attempt to peel back the text to find some elusive “proto-Luke”.  Instead, Jeffrey treats this as sacred theology, the text reveals rather than obfuscates Jesus.

Another great example of Jeffrey’s diversity is his work on the parables.  Many times commentators will express the links to rabbinic traditions in Talmudic and Midrash, not to mention those found in the Hebrew Bible (2 Sam 12:1-5).  Jeffrey takes it further making links to the church fathers (e.g. Origen, Bede, Aquinas), and modern parabolic inheritors in Aesop’s fables, Graham Greene and, to my elation, J.R.R. Tolkien.  Unlike most serious commentators Jeffrey has a light effervescent style of engaging the text without being trifle.  For those responsible for teaching this makes a ready resource for engaging illustrations.

This is a great commentary series for its scholarship and unabashed emphasis on how scripture leads us into the sacred story of self-giving love.  I would commend David Lyle Jeffrey’s volume on Luke in particular for those, especially in ministry, who are looking to dive deeper into the theological power of Luke.

How to Have Impossible Conversations:
A Very Practical Guide
by Peter Boghossian and James Lindsay
Only $2.99!!