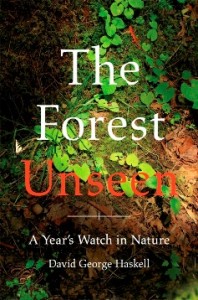 The Beauty in Slowness

The Forest Unseen: A Year’s Watch in Nature

Self-reflection is aggravating. The ice-water shock of realization tosses a man or woman who feels in control into a downward spiral of doubt and emotionally forced commitment to betterment, all for the grand goal of “self-improvement.” It is a speed bump to an otherwise usual and very comfortable day, the stop signal to our pleasing hundred-mile-per-hour lives.  How little we actually like to realize the extent of our personal flaws; there is no summer blockbuster finale excitement in that. We crave speediness and comfort. We enjoy settling into the soft flow of conflict-free life. No one truly wants to engage in the demands of reflection.

But of course we all need it. Participation in the social, ecological, and religious communities that surround us in any kind of healthy way requires the knife in the gut of self-reflection. Otherwise how are we to contribute? True growth comes mainly through the acknowledgement and confrontation of our faults. In order to have something to give we must set ourselves straight.

And thus, in the final pages of The Forest Unseen by David George Haskell I had to have one of those shocking confrontations with myself. I had struggled with chapter after chapter. Reaching the end was a forced accomplishment. After all, the square-meter portion of Tennessee forest Haskell spends the entire book staring into is an uncomfortable fit for an efficient, technologically modified life. The minutiae of the leave-bed, the undersoil, and all the residents therein seems – at surface level –  to offer very little to our smartphones, air conditioners, and television sets. I could care less about a the details of a snail crawling itself over the lichen on a rock, or so I thought.

The Forest Unseen is a record of observations of the aforementioned square of woods, made by Haskell over a calendar year. His particular patch is located deep within a section of southeastern Tennessee, in a small area of old-growth maintained by the University of the South. It is a smaller part of a small piece of forest that managed to evade hundreds of years of logging across the Atlantic east. There is nothing spectacular about the area he chose, merely that it had a comfortable rock for sitting and roughly defined boundaries – a few more rocks and some trees.

Haskell calls it his “mandala,” taking the name of sand paintings made by Tibetan monks as smaller representations of the infinite complexity and grandeur of the universe. The square of forest he chose, and the reflections on it in The Forest Unseen are his attempts to mirror the work of the monks. He is giving his readers, in examinations of the tiniest details of one of the oldest and most undisturbed areas of the United States, a perspective on the rest of the biosphere.

Detail he does. Most every bit of the organisms in his mandala are dissected, often past the cellular level. He explores the hermaphroditic mating habits of snails, the musically equipped katydids, the skin-breathing salamanders, and the isolation-conquering effects of humanity even on these protected places (in the form of chainsaw-created noise pollution and a few invading golf balls). He leads us through the effects of the seasons, and the short-lived and rapacious shrews who shoot like electricity across the mandala. Nothing escapes his examination.

Perhaps, when boiled down in retrospect, much of my hesitancy spawned initially from the blatant reverence Haskell has for his square of forest. With his extreme attention to detail comes a worshipful dedication to the square meter he is studying. It seemed the smallest natural events, from the evidence of deer from the evening before to the behavior of cells within plants at the onset of frost, were the most astounding and miraculous things the world over. A flower begins to show and he bursts forward with a flow of similarly flowery prose to describe it in exultant detail. I was unaware of where my mindset would be shifted by the end of the book. I had no idea that Haskell knew how his mandala played into everyday life in ways that I did not.

So I grew bored in the details and Haskell’s eloquence. Even though a casual review of the book proves that I was quite interested in most everything he examined, while I was reading I was unable to muster any sort of excitement. That is, until I had found my way into the last few chapters.

Haskell, in the final pages of the book, takes a glance back on what he has done. He considers the differences between what he has spent the year focused upon and the hectic lives most of us lead. Although he recognizes the contemporary cliché  that modernity has carried with it an increasing disconnection, he points out that nature and technology are not mutually exclusive. So, instead of harping on the conflict between the modern and the natural, he encourages his readers to be vigilant in finding their own mandalas:

“I was fortunate to be able to watch a small patch of old-growth forest. This is a rare privilege… But old forests are not the only windows into the ecology of the world… we create wonderful places by giving them our attention, not by finding “pristine” places that will bring wonder to us. Gardens, urban trees, the sky, fields, young forests, a flock of suburban sparrows: these are all mandalas.” (244)

It was this part of the book that slapped me with self-realization. I consider myself to be attentive to the beauty of the world in the most unnatural of places. I desire to focus myself towards that and celebrate it. Yet, in my TV and smartphone induced haze, I had found myself annoyed with the work of another who was doing just that. I never shirk from heralding the slow life, never fail to tell people of the beauty and life-spark in the natural; and here I was doing the opposite.

David Haskell pulls out the beauty in slowness. He draws us to the ways in which the smallest details of what we see are a lens to the grandeur of a fantastic universe. We never know to appreciate this unless we take the time to breathe in the minutiae. The Forest Unseen is much more than a naturalistic microscope. It is an impetus for realizing we might be on the wrong path through the woods.