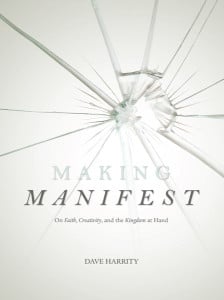 Making Manifest: On Faith Creativity and the Kingdom at Hand
Dave Harrity

Dave Harrity’s Making Manifest had two strikes against it by the time I had finished the introduction (“to begin” on pp. xi-xv). First, it is arranged as a combined group study and personal devotional. This form –  a youth group staple –  specializes mainly in covers splashed with either neon or explosions, faux-edgy graphic design swirling about cool praying teens, and a troubling overuse of phrases like “chew,” “the meat,” and “on-fire.”  It also has an unhealthy preoccupation with the almighty “you,” and with writing on pre-printed lines at the end of each day/chapter.

My second – and I admit, needlessly personal –  issue with Making Manifest is that latter feature. I hate writing in books. Anything that mars the original condition of a book flares compulsion within me. Dog-earing is a cardinal sin; highlighting, an offense to nature. I read trade paperbacks through a thin V of pages in order to avoid breaking spines. Within the introduction of Making Manifest Dave Harrity asked me to do all those things. “There’s space for you to write… crack the spine so the book rests flat, dog-ear, sketch and scratch,” He says (xiv). I almost flipped the book to the floor in frustration.

But, a quality book review demands the reading of more than the introduction, so I persevered. It was good I did. Harrity’s book is more than its trappings, and was worth momentarily setting aside my ridiculous peeves. It is a noble attempt to get Christians to truly engage with creativity through admirable modes like words, stillness, and practice.

Making Manifest is arranged into four week-long sections which divide 28 daily readings and their accompanying exercises. Each section is introduced with a poem by Harrity. Often the poems are used in the exercises – he asks us to pick out lines we like, identify parts we hate, and mull over line breaks and the absence of rhymes. Usually the chapters are headed by pieces of scripture.

The art with which Dave Harrity works the reader – and simultaneous writer – towards the heart of the book is impressive. Ultimately, he wants to introduce those of us scrambling like pinballs through fast food lives to the peace of writing as discipline; and, once introduced, to have the impetus to create well in our faith communities and neighborhoods.

He starts slow. The first entries begin to explore potential, awareness and moment, all reinforced with ideas of God as creator and scripture as poetry. The exercises ask what we see in the world and inside ourselves. They have set limits. Sometimes he asks us to write just ten sentences. By the seventh chapter (and exercise) – which is the end of the first week if we happen to be doing this daily – he starts to talk about actively creating, framing the act of creation as a spiritual discipline. It is here you try your first hand at poetry. He provides the opening line and the subject. We fill in the rest. There are three requirements: it must be ten lines, titled awakening, and it is not allowed to rhyme.

The following chapters really dive into what is probably best described as a theology of creation. Devotion, the power of language, and love and incarnation as initially creative forces are a few of the ideas strung out before you as the week goes on.

By the end of the second week we are once again scrawling out your own poetry. Again, he gives a subject, a starting line (“only if you need it. And it’s the last one you’re gonna get!”), and the familiar ten-lines and no rhyming requirement, along with an insistence to include “at least three similes,” one of which must be about kissing. By this second poem we feel like we’re getting the hang of things.