The Surprising Spirituality of Brandi Carlile

*** LISTEN TO an NPR interview with the author

When I found out Brandi Carlile was writing a new memoir called Broken Horses, I could not wait to buy a copy. I became fascinated with Carlile after she played “The Joke” at the 2019 Grammy Awards. “Who is this woman singing about Syrian refugees and gay kids being bullied?” I said to myself. I had to find out more.

I quickly learned that you cannot put Brandi Carlile in a box. She has a passion for social justice and plays a concert for incarcerated women every year. Carlile is a multi-award winning Grammy artist and a self-proclaimed “Jesus freak” who keeps a copy of Brennan Manning’s The Ragamuffin Gospel on her bedside table. She’s also a lesbian who was kicked out of her teenage church.

I read Broken Horses from cover to cover within 24 hours. I expected an honest, heartbreaking tale, but I was also met with sincere humility and personal transformation. Carlile is familiar with tragedy. She faced her own mortality at age four after developing a bad case of meningitis. In the hospital, she flat-lined multiple times and survived a coma. Raised in a tiny town in rural Washington, she grew up poor. Her family moved multiple times and she eventually dropped out of high school. As difficult as these things were to read, the most devastating storyline happened in chapter eight.

Carlile tells a harrowing story about attending church camp as a teenager and deciding to get baptized. She invited her family to attend the big event, but moments before the service —with her family and friends already gathered in the audience — the pastor asked to speak privately with her. “Do you practice homosexuality?” he sheepishly said. “You know me. You know my girlfriend. You let me go through the training program,” Brandi responded. Then she ran out of the church, embarrassed in front of her entire community.

It would be understandable if Carlile never gave Jesus a second thought after such a traumatic event, but this didn’t happen. Despite the church’s rejection of her, she continued to be curious about Jesus. A mystic at heart, Carlile weaves tales throughout the book about her spirituality. As a little girl, music calmed her when she couldn’t sleep at night. She listened to a cassette with kids church songs on it but at the end of the tape there was an additional song with “big, gorgeous, angelic voices in multiple layers of complex harmony.” Carlile fell in love with the song, but when she brought it up to her parents they both insisted that they had not added it to the tape. With the mystery unsolved, she makes peace that the addition was perhaps supernatural. She concludes, “I listened to that music every night. It was my proof that God is real.”

Occurrences like this kept Carlile coming back to Jesus. Early into her music career, she describes feeling “rudderless.” Unresolved pain from her childhood still held a grip on her and she was taking it out on others as well as her own body. Looking for answers, she says “I dove into an independent Bible study that led me to read the Good Book itself and then thousands of pages on Luther, Calvin, and the Reformation gospels, as well as some of the great pop-culture Christian icons of our time: Brennan Manning, Rob Bell, Rachel Held Evans, Greg Boyd, C.S. Lewis (p. 148).”

She finally “decided to confront my fear of church and what I came to understand was actually a moderate form of PTSD by sitting through unknown sermons and surrounding myself with strangers.” She was baptized on Easter Sunday in 2009 and even considered enrolling in seminary after developing a passion for her faith.

As I read this part of her story, I found myself crying. Crying for all the LGBT kids who are kicked out of their homes and churches because of their sexuality but, unlike Brandi, are simply too scarred to return. When I read about Carlile finding Jesus on her own terms, I wondered: how often do kids have to do the hard labor of reconciling their faith and sexuality all by themselves?

Most Christians from conservative circles would dismiss Carlile’s story of faith on the grounds of her same sex marriage, but those who do are missing out on invaluable lessons about forgiveness, redemption, and justice. It struck me that Carlile practices forgiveness better than most Christians I know. She created an entire album called “By the Way, I Forgive You” and publicly forgave the pastor who humiliated her. She then asked her audience to consider who they needed to forgive.

When Carlile discusses the people who have hurt her, her tone is charitable. She looks back on that traumatic time and says “I see grace everywhere.” Brandi admits that her first attempt to be baptized was more of a cultural rite of passage than an actual transformation. She writes, “I never spoke to him again. But I wasn’t mad at him. I didn’t feel ‘wronged’ yet because I still felt wrong. I was nowhere near ready to be forgiven… (p. 86).” I stopped to imagine a church that takes cues from Brandi Carlile on how to speak about those who have hurt us and those with whom we profoundly disagree. What would it look like to lay our weapons down, give one another the benefit of the doubt, and practice uncharged honesty? This does not make what she’s been through acceptable, but it demonstrates the beauty found when we refuse to define ourselves by fear and bitterness.

Carlile is a case study on transformation. When the church labeled her “unclean” and cast her outside the city gate, she used this as inspiration to help others who have been rejected. One of Carlile’s childhood idols is Tanya Tucker. Tucker was a popular country singer in the 1970s but was deemed “finished” by the music industry after a public divorce and a long battle with addiction. Carlile convinced Tucker to make an album with her after a 17 year musical drought, but when Carlile pitched it to leaders in the industry she “heard countless times that no one would be willing to give Tanya a second chance (p. 269).” Because of Carlile’s tenacious belief and willingness to advocate for an outcast, she helped Tanya not only create another album but go on to win the Grammy for Best Country Song for “Bring My Flowers Now” and Best Country Album for “While I’m Livin’ in 2020.

Broken Horses stands out as a resounding example that the people the church deems “unworthy” may be the very people Jesus wants us to learn from the most. They are often the ones quietly doing what Jesus actually asks of us.

Many may be surprised to learn about Carlile’s spirituality, but if they pick up this book, they will find rich gospel undertones that stretch the ethical imagination. 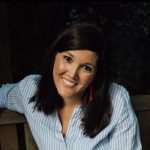 Katie Crosby is a social worker (MSW) and freelance grant-writer. In her spare time, she writes on faith and her previous work can be found at Fathom Magazine. Find her on Twitter @crosby_katie and Instagram @katie_crosby.