A Nuanced View of a Dangerous Phenomenon

While the links—both real and perceived–between religious affiliation and partisan politics are not new, it would be fair to say that this issue has gained more widespread attention in recent decades, as the past few election cycles have displayed the extent to which polarizing debates are, for so many Americans, a matter of sacred concern. For so many self-professed Christians, liturgies of political allegiance have come to outweigh in importance any practice proffered by the local church. Furthermore, moments of crisis like the current COVID-19 pandemic have a way of exacerbating our deep-seated divisions, both inside and outside the church, a fact that has been widely noted in various media outlets.

In the early days of the crisis, the New York Times published an opinion piece entitled, “The Road to Coronavirus Hell was Paved by Evangelicals,” which argued that the support of an evangelical Christian base for the Trump administration, and the rejection by that same base of scientific principles, are largely responsible for the disastrous outcomes wrought by the virus in this country. While the article’s headline was later changed to the more tempered, “The Religious Right’s Hostility to Science Is Crippling Our Coronavirus Response,” the central premises of the piece remained intact. An article in the Atlantic followed, weeks later, drawing connections between evangelicalism and the “Qanon” movement responsible for much of the conspiracy-centered thinking around numerous divisive public figures and issues, including the pandemic. Most recently, a Washington Post op-ed posed the following question and corresponding answer: “What’s really behind Republicans wanting a swift reopening? Evangelicals.” Such pieces, while compelling in their way, rely largely on pathos and anecdotal evidence to make their case.

In their recently published work, Taking America Back for God: Christian Nationalism in the United States, Andrew Whitehead and Samuel Perry aim to move beyond anecdotal accounts for something like a more quantitative analysis of the phenomenon of Christian nationalism and its impact on partisanship, policy-making, and our collective political imagination. Christian Nationalism, as defined by the book, is “A cultural framework—a collection of myths, traditions, symbols, narratives, and value systems—that idealizes and advocates a fusion of [a particular sort of] Christianity with American civic life (10).” Whitehead and Perry are researchers with backgrounds in both Sociology and Religious Studies, and this book is at its strongest when it takes up the difficult but important work of engaging the cultural proliferation of Christian Nationalism in a rigorously methodical way that privileges nuance over easy stereotyping. Thus, their approach involves viewing Christian Nationalism not as a monolithic reality but as something that exists on a spectrum.

By sorting their survey subjects into four categories, rather than just two (for or against Christian Nationalism), and by attending to the narratives articulated in a series of interviews with people across the four categories, Whitehead and Perry are largely able to attain their goal of a more nuanced account of these trends, and in the process advance some claims that can serve as a corrective to some deficiencies in the larger public discourse about religion and politics. Specifically, their method allows them to resist the tendency to paint all evangelicals, let alone all Christians, with one broad brush. Perhaps most surprisingly, and most helpfully, they argue that Christian Nationalism is perhaps less of a Christian phenomenon than its name indicates, and that in fact, it seems to be inversely proportional to religious commitment. That is, a strong connection to a church community and adherence to that community’s practices can serve to discourage Christian Nationalist tendencies—a premise that might not be surprising to many readers, but which is helpful to see evidenced in the research.

This is not a perfect book. While the research methods of Whitehead and Perry are clear and valid, and while the appendices at the book’s conclusion do an excellent job of outlining their approach, there are times when their narrative, particularly on the way that Christian Nationalism affects policy, veers toward confirmation bias and when their reasoning borders on circularity. However, this is overall an illuminating and important account of the pervasive spread of Christian Nationalism in recent decades and of its dangerous and powerful impact on both the church and the larger culture. 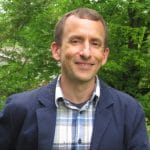 Todd Edmondson is a pastor at First Christian Church in Erwin, Tennessee, and Associate Professor of Humanities and Composition at Milligan University. He lives in East Tennessee with his wife, three kids, and a golden retriever.