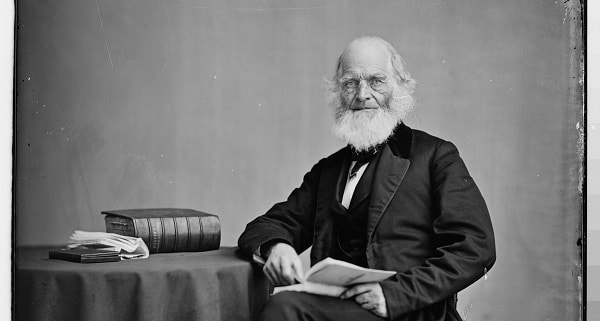 William Cullen Bryant (November 3, 1794 – June 12, 1878) was an American romantic poet, journalist, and long-time editor of the New York Evening Post. On January 11, 1821, Bryant, still striving to build a legal career, married Frances Fairchild. Soon after, having received an invitation to address the Harvard University Phi Beta Kappa Society at the school’s August commencement, Bryant spent months working on “The Ages”, a panorama in verse of the history of civilization, culminating in the establishment of the United States. As it would in all collections he subsequently issued, “The Ages” led the volume, also entitled Poems, which he arranged to publish on the same trip to Cambridge. For that book, he added sets of lines at the beginning and end of “Thanatopsis” that changed the poem. His career as a poet was now established, though recognition as America’s leading poet waited until 1832, when an expanded Poems was published in the U.S. and, with the assistance of Washington Irving, in Britain. (via Wikipedia)

Yet one smile more, departing, distant sun!
One mellow smile through the soft vapoury air,
Ere, o’er the frozen earth, the loud winds run,
Or snows are sifted o’er the meadows bare.
One smile on the brown hills and naked trees,
And the dark rocks whose summer wreaths are cast,
And the blue gentian flower, that, in the breeze,
Nods lonely, of her beauteous race the last.
Yet a few sunny days, in which the bee
Shall murmur by the hedge that skirts the way,
The cricket chirp upon the russet lea,
And man delight to linger in thy ray.
Yet one rich smile, and we will try to bear
The piercing winter frost, and winds, and darkened air.