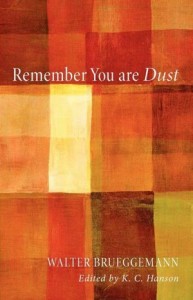 The Prophet of God in the Modern World

Remember You are Dust

Walter Brueggemann is not sure that the church as we know it will survive.  Like the Old Testament prophets he has been studying and channeling through his long, distinguished, provocative career, Brueggemann has a keen awareness of the distortions of modern life and thought and how out of touch a biblical vision seems.  “The issue,” he says, is “whether there will be sustained and sustainable communities of faith that can bear witness to the life of God in the world and to the life of the world lived in response to the God of the gospel.  It is not very difficult to imagine the wholesale silencing of that witness” (x-xi).

Bruggemann has been a prolific author on his own but in recent years his authorial output has been aided by collections edited by colleagues.  Edwin Searcy published prayers from Bruggemann’s classes at Columbia Theological Seminary [Awed to Heaven, Rooted in Earth: Prayers of Walter Brueggemann, Fortress, 2002].  Now K.C. Hanson has followed up a 2011 book of collected Brueggemann essays from the Journal of Preachers with a second collection entitled Remember You are Dust.

The most recent book is an eclectic gathering of pieces that are nevertheless held together by the scholar’s abiding interests and energy.  The title is an attempt at an overarching theme, but readers coming to this book for an extended reflection on mortality or Ash Wednesday liturgies will be disappointed.  Brueggemann does visit these themes, and very effectively, in the final essay that gives the collection its name, but the more persistent themes are social justice, the emergence of the modern self, and the crisis of biblically-formed people in a deformed world.

The prize of the bunch is the second essay entitled “Praise to God Is the End of Wisdom–What is the Beginning?”  The beginning is obedience and, once Bruggemann makes that clear, the ensuing narrative of the incompatibility of the “fear of Yahweh” with the doubt and autonomy engendered by the modern project is riveting.  Brueggemann diagnoses the pain of our times with precision and sympathy.

This biblical vision of human faith and conduct is now scarcely credible, and when we speak it, we tone it down in order to not to be ludicrous.  The reasons for this lack of credibility are complicated and far from clear.  They have to do, in any case, not with some recent emergence of “permissiveness,” or the “breakdown of the family,” or any of the easy targets of blame.  Rather we are heirs of a long intellectual process that is in deep conflict with the biblical vision, and that continues to offer a powerful and attractive alternative vision of reality.  [18-19]

If the prophetic scholar has some sympathy for the pain he offers no easy hope for a happy ending.  Like Karl Barth, Brueggemann recognizes the seemingly impossible challenge of overcoming 400 years of modernity.  If there is a way forward, it is in a monumental reclamation project, reclaiming unpopular, almost archaic terms like “authoritative teaching” and “priority of community” (19) from the rampant individualism that rules the day, at least in the West.

Brueggemann sometimes misses in these essays.  His powerful rhetoric sometimes outruns his critical examination of the texts he is explicating, giving the impression that the essays are not as carefully crafted as they could be.  He also has a disconcerting habit of launching into a litany of pet bugaboos from a seemingly minor pretext as when a passage on prophetic words of assurance to exiles suddenly explodes into a critique of a contemporary landscape of “failed privilege and hegemony” and “economic displacement and bewilderment about sexuality” (47).  The prophets of the Hebrew scriptures are not known for their restraint either, but there is far more promised here than Brueggemann can deliver on in such brief essays.

The exuberant trajectories are forgivable, however, because the reader feels Brueggemann’s energy and deep grounding in his material.  The occasional air bursts are inevitable side effects of a convicted believer conveying the urgency of his message.  Recognizing that he is speaking to preachers in these essays, I appreciate the inspiration he delivers along with the interpretative work.  This is exegesis and Jesus.  And though Walter Brueggemann is not sure the church will survive, you can’t help but  believe that something wild and holy will.  Even when we are dust.  There is freedom in that.

Alex Joyner teaches at the Course of Study School at Perkins School of Theology, SMU, and is pastor of Franktown United Methodist Church on Virginia’s Eastern Shore.  He is the author of Hard Times Come Again No More: Suffering and Hope [Abingdon, 2010].