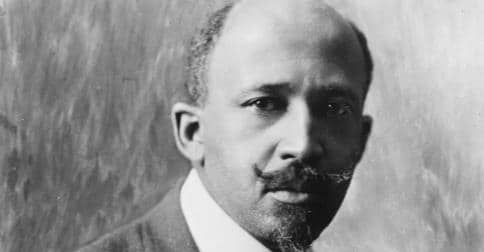 A friend shared a portion of this prose poem by W.E.B. DuBois on Facebook recently, and I found it beautiful and timely, and decided to share it here.

W.E.B. Du Bois (1868 – 1963) was an American sociologist,  socialist, historian, civil rights activist, Pan-Africanist, author, writer and editor. Born in Great Barrington, Massachusetts, Du Bois grew up in a relatively tolerant and integrated community, and after completing graduate work at the University of Berlin and Harvard, where he was the first African American to earn a doctorate, he became a professor of history, sociology and economics at Atlanta University. Du Bois was one of the founders of the National Association for the Advancement of Colored People (NAACP) in 1909. (via Wikipedia)

I believe in God who made of one blood all races that dwell on earth. I believe that all men, black and white, are brothers, varying through Time and Opportunity, in form and gift and feature, but differing in no essential particular, and alike in soul and in the possibility of infinite development.

Especially do I believe in the Negro Race; in the beauty of its genius, the sweetness of its soul, and its strength in that meekness which shall yet inherit this turbulent earth.

I believe in pride of race and lineage and self; in pride of self so deep as to scorn injustice to other selves; in pride of lineage so great as to despise no man’s father; in pride of race so chivalrous as neither to offer bastardy to the weak nor beg wedlock of the strong, knowing that men may be brothers in Christ, even though they be not brother-in-law.

I believe in Service–humble reverent service, from the blackening of boots to the whitening of souls; for Work is Heaven, Idleness is Hell, and Wage is the “Well done!” of the Master who summoned all them that labor and are heavy laden, making no distinction between the black sweating cotton-hands of Georgia and the First Families of Virginia, since all distinction not based on deed is devilish and not divine.

I believe in the Devil and his angels, who wantonly work to narrow the opportunity of struggling human beings, especially if they be black; who spit in the faces of the fallen, strike them that cannot strike again, believe the worst and work to prove it, hating the image which their Maker stamped on a brother’s soul.

I believe in the Prince of Peace. I believe that War is Murder. I believe that armies and navies are at bottom the tinsel and braggadocia of oppression and wrong; and I believe that the wicked conquest of weaker and darker nations by nations whiter and stronger but foreshadows the death of that strength.

I believe in Liberty for all men; the space to stretch their arms and their souls; the right to breathe and the right to vote, the freedom to choose their friends, enjoy the sunshine and ride on the railroads, uncursed by color; thinking, dreaming, working as they will in the kingdom of God and love.

I believe in the training of children, black even as white; the leading out of little souls into the green pastures and beside the still waters, not for pelf or peace, but for Life lit by some large vision of beauty and goodness and truth; lest we forget, and the sons of the fathers, like Esau, for mere meat barter their birthright in a mighty nation.