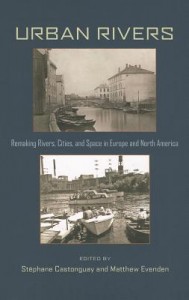 The Tense Marriage of Rivers and Urban Space

Rivers have flowed like arteries and veins across the continents for millennia. They have carried the lifeblood of societies, given paths to the virus of wars, and generated countless measures of energy. Most every major city has grown alongside a riverbank: Paris on the Seine, Washington D.C. on the Potomac, London on the Thames, Moscow on the Moskva, and Beijing on the Yongding, Chaobai, and Hai, to name a few. They funnel transportation, food, shipping and trade into and out of the urban metropolises that serve as hubs for our societies. Rivers globally are tied intrinsically into the urban areas that lie on their banks.

However, the development of these urban centers has not always been sustainable for their waterways. The large concentrations of people mixed with rapidly growing industrialization during the late nineteenth and early twentieth centuries were unkind to river systems, as was the realization that rivers were rather adept at disposing waste. Year and years of disuse resulted in heavy pollution and contamination. Rivers stank, were undrinkable, and even began to lose clear passageways as the channels filled with refuse. Much of this harm has begun to be reversed due to the environmental impetus of the mid-to-late 20th century. This shift is fortunate, as the future development of our cities leans dependently not only on the health of our rivers, but in the way the cities are built around them and the resources are managed, as Stephane Castonguay and Matthew Evenden explore with the articles they have collected in Urban Rivers: Remaking Rivers, Cities, and Space in Europe and North America.

There are twelve essays in Urban Rivers, excluding Castonguay and Evenden’s conclusion, all dealing with the developmental changes of cities around the world in relation to the rivers that run through them. They are grouped into three separate sections which deal with “Industrialization and Riverine Transformations,” “Urbanization and the Functions of Rivers,” and “Territorialities of Water Management.” Which, less academically, can be deconstructed to mean that the book deals – in a roughly chronological order – with the the geographic, social, and economic changes in rivers throughout the Industrial Revolution, the further function of rivers as more people moved into the cities and they began to grow rapidly, and the ways in which rivers, their water, and the land around them was managed in the wake of the environmental movement and the proposed sustainable beautification of cities.

This trek across the globe takes readers in search of the connections between the natural and the artificial, the fusion of the flowing riverine force and the creep of humanity’s conquest. Humanity’s urban relationship with water stumbles upon conflict not in its control over the natural forces at hand – mankind has not had much problems in controlling the flow of rivers – but instead in the over-use and exploitation of the waterways.

Historically, urban centers have been shockingly unaware that development in and around rivers will have some effect on the ecology and hydrology of those rivers in time. The way this development is undertaken can change the course of the health of the city as a whole, but especially the neighborhoods along the river; and most cities have done a less than ideal job at this. Take Brussels in the late 19th century: in order to “cover the cesspool” that was the working class dwellings along the river, the government of Brussels undertook a massive construction project that buried the Senne beneath the streets and buildings of the city. This confinement of the river destroyed the flood plains and the fishing industry, making life significantly harder for the boroughs around the city, as they had to deal with constant flooding and severely polluted water.

Likewise the U.S. cities of Chicago and Washington D.C., in the wake of their respective growths in the early to mid-20th century found that they had to manage the refuse these masses of people and industries produced. These cities handled their large volumes of refuse differently.

Chicago found that the outflow sewage from the Illinois River played havoc on the drinking water taken from Lake Michigan, and thus decided to build canals to other nearby rivers so that the expanded water systems would “self-purify.” It didn’t work. The Illinois degraded more and more, destroying fishing and mussel industries and presenting the entire city with a health hazard. Finally the city introduced sewage treatment, but only residentially, and pollution in the Illinois did not begin to subside until the 1960s.

D.C. experienced similar growth, but instead introduced water filtration and purification early in the 20th century in order to appease fears that the officials in the city would not have safe drinking water. However, whatever purification was done for the city did not protect the stretch of the Potomac below the capital city. The degradation again affected fishing, water quality, and health. Here the problem was exacerbated because the Potomac is a large tribuary of the much larger Chesapeake Bay, which forms an entire economy of itself in Maryland and Virginia. Despite efforts to build more water purification and sewage treatment plants in the D.C. area, little changed even far in the 20th century. Bureaucratic concerns simply trumped the natural. Even the facilities that were built operated at far below capacity. The hydrology of the city has only begun to get on track in the last few decades.

These examples are only a small part of the many other social and natural relationships that have grown and changed between our cities and their rivers. The joining between these two is terse, a broken marriage with no chance of divorce. Humanity needs the river, but human needs have always trumped the ecological needs of the the riverine systems. There are reasons that cities have sprung up on the banks of rivers: rivers provide countless vital resources for the human population. However, as industrialization invaded the world the functions of rivers changed. Cities had to reconcile the way they used their rivers with the ecological and social harm that their usage caused.

Urban Rivers, boiled down – all puns unintended – is a book chronicling the changes in the usage of rivers through the growth of populations and the massive onset of industrialization. It is ultimately one of the most fascinating studies on development and ecology I have read. In acknowledging that the rivers and the cities that lie on their banks are intrinsically tied to each other, the articles are able to explore, through a consideration of our global history, the potential we have to destroy – and to preserve – our natural resources we often take for granted. It is an excellent look at development and the unintended consequences on the natural system that are integrated into our daily lives.