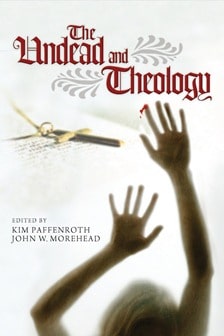 The Undead and Theology

From the growing popularity of [easyazon-link keywords=”The Walking Dead Complete Season” locale=”us”]The Walking Dead[/easyazon-link] to the predicted Mayan Apocalypse, 2012 was a year focused on End Times and otherworldliness. Fitting right into our curiosity of horror is The Undead and Theology, a collection of essays edited by Kim Paffenroth and John Morehead. They collected several essays under three topics: Vampires, Zombies, and Other Undead. Each essay focuses on a contemporary, pop culture connection to an undead, and then muses on the theological implications of the connection.

While one might question why vampires and zombies have their own section and everything else falls under “other undead,” it does make sense because of how much attention those two groups are currently getting. I’m not sure how many shows are running right now about vampires, but I know golems have zero. So, the biggest sections of the book focus on the undead creatures that others might be most familiar with. The [easyazon-link keywords=”Anita Blake” locale=”us”]Anita Blake series[/easyazon-link], the Walking Dead, and [easyazon-link keywords=”Buffy: Vampire Slayer complete series” locale=”us”]Buffy: Vampire Slayer[/easyazon-link] all make an appearance with thoughtful discourse. The “Other Undead” section gave insights into golems and the Goth culture, which are things I am not familiar. Without having knowledge of those topics, I was still able to follow the theses and come out with new ideas to mull over.

Society has been thinking about, talking about, and worried about the undead for centuries. At the International Medieval Congress in May, one of the topics was “Medieval Undead.” The undead are not new, and during times of great financial instability and horrific disasters such as floods and earthquakes people return to the stories and myths that can provide something to lean on, to cover concepts that perhaps they do not have words for yet. One only has to read the websites about Zombie Preparedness to find out how many people are stockpiling food and weapons for a Zombie Apocalypse. In reality, they are people concerned about a time when the power will go out and not come back and neighbors turn on neighbors.

Without the space here  to touch on each essay in the anthology, I will mention three to give an idea of the conversations unfolding in the book. Jarrod Longbons’ essay “Vampires are People, Too” gives focus onto personalism in the world of Buffy the Vampire Slayer. The difficulty of writing theology concerning Joss Whedon (the writer of Buffy) is that he is an atheist and absurdist. Longbons moves through a strong explanation of the changes from highly Catholic stories to the current, secular ideas of vampires. From there, he focuses in on the mythos of the Buffyverse and the concept of those who have been dehumanized being “rehumanized” if a word is to be made for the situation.

The seventh essay in the book, “When All is Lost, Gather ‘Round” is Ashley John Moyse’s exploration of how hope can appear in the most destitute of circumstances. He explores the world of the television show The Walking Dead and how the theologies of Karl Barth, Gabriel Marcel, and Dietrich Bonhoeffer can provided a place to build hope in a world of darkness. The three theologians serve as a counterweight to Friedrich Nietzsche. Moyse uses a specific episode to create a starting point for his thesis, works with the possible Nihilistic views of the show, and then counters with the hopefulness that can potentially be found.

Finally, Beth M. Stovell argues for a parallel between early Christian’s and the Goth subculture’s search for a place within the group, while fighting and questioning the norms surrounding them. “Eat of My Body and Drink of My Blood” works on the apocalyptic metaphors of John’s Revelation. Revelation’s end of times parables are meant to uplift those who feel as if there is nothing left, the world is against them, and what they stand for is foolish. Stovell investigates what having the sense of belonging and safety meant for the early Christians and what it now means for those who identify with being Goth.  Stovell lists four characteristics of apocalyptic literature, quoting such scholars as Elisabeth Schussler Fiorenza, and then applies them to the resistive subculture of her thesis.

The other nine essays do the same as the three mentioned above – they seriously engage a popular culture issue of what is oftentimes deemed “silly” and “pointless.” The formats of the essays would be familiar to anyone who has written a scholarly paper. The theses are clear, the endnotes are there, the quotes are from scholars the academic and theological circles respect. As someone who also engages in conversations and papers about the fantastical and its place in theology, I can fully appreciate what the anthology is doing. While reading it, I recalled conversations I’ve had in seminary asking “Can a pacifist kill a vampire or a zombie if it has no soul?” I wondered about the despair that some feel, when they believe that God doesn’t necessarily hate them, but just doesn’t know they exist and how H.P. Lovecraft might have some things to say about those feelings. How many college freshmen can quote large chunks of the gospel of John? Now how many can quote large chunks of the Harry Potter novels?

Papers such as the ones presented in The Undead and the Theology are a bridge of conversation from theology classrooms to what is intriguing the masses today. When graduates throw up their hands and say “And how am I suppose to use this education in the real world?!” (and what seminary student hasn’t done that?), we have an answer. The ideas of writing papers might sound stilted, and silly, but it’s a starting point. In 2009, the UN had a panel on Battlestar Galactic and how it examined human rights, terrorism, and faith. Perhaps one day we can see papers such as the ones on the undead in this book being examined at the North American Christian Convention or Lambeth.