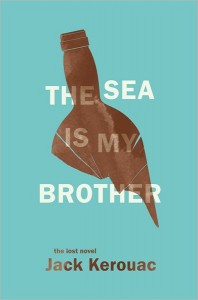 Insight into the Adolescent Mind
of a Young Beat Writer

The Sea is My Brother:

A young man searches for meaning to his life, trying to find a place for all his philosophies and ideals. Leaving his home for another, he is faced with what it means to act out convictions versus simply discussing them.
The Sea is My Brother is author and poet Jack Kerouac‘s first novel, written in 1942 after his eight day stint as a sailor for the US Merchant Marines. Kerouac considered it to be a complete waste of time, and never sent the manuscript to publishers. In 1992, Kerouac’s brother-in-law discovered the manuscript sketches amongst the author’s papers. The novel remained unpublished until 2011. The novel is short, a mere one-hundred and fifty-eight pages, but when Kerouac’s style is considered, brevity doesn’t necessarily mean a simple read.

The chief struggle of the protagonist is whether or not he is capable of leaving a world of ideas and philosophical musings for one that puts those ideas into practice. William Everhart spent the past six years living the life of a scholar in the English classroom involved in “a serious study of life and strove to understand it rather than accept it with an idiot’s afterthought, if any at all.” Upon a chance encounter, he meets Wesley Martin, a current member of the US Merchant Marines. If Everhart is an elitist intellectual, Martin is his introspective, experience-driven foil. These two people reflect aspects of Kerouac’s own personality, philosopher and realist. Neither character wins out over the other in the end. The novel ends abruptly, with no closure on Everhart’s existential wrestling. The reader is left wondering if Everhart embraced the life of the merchant, or if he went back to being an assistant lecturer, safe in his books and philosophers. His long-winded diatribes isolate him because either the reader wants Everhart to finish talking, or does not particularly care for what he is waxing on about: “‘[A]s a matter of fact, he’s an iconoclastic neo-Machiavellian materialist,’ cooed Bill. Danny glanced askance: ‘Am I supposed to know what that mean?’ Bill flushed.”