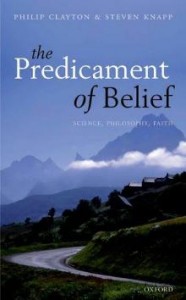 A Defense of What Faith?

The Predicament of Belief:

A Review by Jordan Daniel Wood

According to Philip Clayton and Steven Knapp those who claim to believe in Christianity in the modern context find themselves in a very serious predicament. The predicament is twofold. On the one hand, it is extremely difficult to believe in traditional Christian claims about ultimate reality (UR) in the face of serious “reasons for doubt.” On the other hand, it is problematic to ignore the “axiological and theoretical power” of religious accounts of the ultimate reality, especially Christianity (viii).

Chapter 1 sets out in more detail the “reasons for doubt” and the view the authors advocate in response to such reasons. The reasons include: modern science, the problem of evil, pluralism, the tenuous historical veracity of NT accounts, and the literal resurrection of Jesus. For the authors, modern science is “perhaps the single most important” reason for doubting Christian claims, with the problem of evil coming in a close second (5-6). They propose to take these objections to traditional Christianity seriously by advocating “Christian minimalism.” This view of the UR is “Christian” insofar as it holds to some form of traditionally Christian beliefs. It is “minimal” in two senses: first, they endorse the rationality of fewer traditionally Christian claims; second, they hold to these claims with much less certainty and less claim to rationality than is common among “orthodox” accounts of Christian belief (18).

Chapters 2 and 3 articulate the scientific and philosophical arguments for Christian minimalism while taking full account of the problem of modern science and the problem of evil. The overall picture of the “hypothesis” Christian minimalism seeks to uphold is this: there is a “not-less-than-personal” cause of the universe, something like a mind (non-physical and not subject to higher laws), which apparently has intentions and desires, and in fact desires our well-being (23).