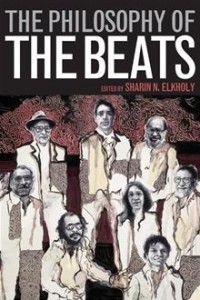 The Philosophy of the Beats

With the release this summer of a film version of Jack Kerouac’s On The Road (directed by the phenomenal Walter Salles), as well as the publication of the first issue of the The Beat Studies Journal (May 2012) we are apparently in the midst of a revival of interest in the so-called “beat generation”. Was there a “beat generation”? Allen Ginsberg said no, there was only a bunch of writers trying to get published. To Jack Kerouac the beat generation were those “who really know where we are.”

When one former Beat poet was told of a new book entitled The Philosophy of the Beats she asked “Did the Beats have a philosophy?” Well, yes, but only if the word “philosophy” is interpreted in the broad, non-technical sense utilized in this University Press of Kentucky series The Philosophy of Popular Culture (edited by Mark T Conard). As far as I can tell this is the only volume in that series of twenty-five that is not focused on film, television, or sports.

As Ginsberg’s response indicated, the Beats were primarily a group of young men (and a few fascinating women) who met after World War II and influenced one another, collaborated and published a variety of novels, poems, and essays. As editor Sharin Elkholy indicates in her introduction, the word “Beat” refers to both a literary movement and a lifestyle. There was a New York City nucleus around Kerouac, Ginsberg, and William Burroughs; and a West Coast movement around Lawrence Ferlinghetti and the City Lights Bookstore in San Francisco. The subterranean bohemian currents of American life had been running for a hundred years, but it was during this post-war decade that they broke the surface into national consciousness.

This volume analyzes “beat style” recasting some central Beat themes in a philosophical framework that the authors believe demonstrate their abiding relevance. The sixteen essays are arranged in four sections of four essays each, gathering recent scholarship around Beat history, identities, aesthetics, and politics. The triumvirate of Kerouac, Ginsberg, and Burroughs are examined in about half the essays. Two of the more significant essays are on two often overlooked female Beat poets Diane de Prima and Joanne Kyger. Two others look at the work of Gary Snyder, a figure clearly related to the other Beats, but also somewhat distinct. The essays situate the Beats in relation to their own intellectual sources (existentialism, surrealism, Dada, etc) and contemporary philosophical analogues (Foucault, Deleuze and Guattari, French feminism, etc). They provide a comprehensive survey of the current state of Beat studies, introducing the main subjects, themes, and scholars involved. This volume is a nice complement to an earlier set of essays edited by Jennie Skerl entitled Reconstructing the Beats (Palgrave, 2004).

In the 1950s, the Beats were celebrated by few and scorned by most. In post-war America the societal expectation was for hard work, getting married, starting a family, owning a home, settling down, and enjoying the benefits of a growing consumer society. It was the apotheosis of the American Dream. The United States was in a cold war with the Soviet Union, and just as Sputnik represented a threat from abroad, many thought the “beatnik” represented a threat at home – not a violent, terrorist threat, but a more insidious moral, spiritual, and psychological threat. The television character Maynard G. Crebs on Dobie Gillis became the archetypal beatnik: lazy, unemployed, irresponsible, and needing constant supervision. Overshadowed by mushroom clouds and gripped by the slow death of conformity some youth began to march to “the beat” of a very different drummer and in a very different direction – away from the American Dream and towards something more cosmopolitan, spontaneous, and primal.

It’s curious that in 1956 when Ginsberg was reading “Howl” at City Lights, Martin Luther King was leading the Montgomery Bus Boycott in Alabama, and Billy Graham and Carl Henry were beginning the magazine Christianity Today. All three of these moments were distinctively American expressions of religion and spirituality. There were few (if any) overlap in concerns or involvements between them, except for a common spirit of contestation. All of them believed that something significant was underway in America. All believed that religion was crucial to what was happening.

The evangelicals around Graham and Henry were determined to increase their educational and cultural capital in the wider society and to not lose ground to secularism. Dr. King and the civil rights movement were determined to break the grip of Jim Crow in the South and to obtain the equal access that the Constitution promised, thereby increasing their political and economic capital. Both groups shared a common Christian heritage, a biblical vocabulary, and a desire to be part of mainstream America.

The Beats were trying to “capitalize” on something entirely different – they wanted to escape the American mainstream. The Beats responded to secularism not through retrenchment in traditional Judeo-Christianity, but by becoming the first group in America to be “spiritual but not religious.” They were also largely apolitical (or at most anarchist libertarians) interested more in free speech than voting rights. However, they reveled in black music, language, and style. In fact, without urban black culture there would never have been a beat generation.

Perhaps the Beats are still of interest to some young Christians simply because they flagrantly violated so many evangelical taboos. Andreas Seland’s essay comparing the poet Charles Bukowski and the philosopher Soren Kierkegaard on the dialectics of love opines “the Beat figure, as we know, is a person who throws himself into the cracks of middle-class morality.” Many of the Beats eventually became trapped in solipsism and despair, and that is one lesson that should not be overlooked. “There were many casualities,” noted Gary Snyder. However, in their restlessness with the American Dream, their cynicism about mainstream society, their hunger for spontaneous expression, and the desire to be at home in their own bodies and with the bodies of others, there is a recurring call that many still find difficult to ignore. I don’t look to the Beats for all the answers, but I sure do find them giving voice to some of the most fascinating questions about embodiment, desire, imagination, poetics, vulnerability, and emotional intensity. These are not topics alien to Christian life but they are topics often foreign to Christian thought and reflection.

Click on the link below to continue reading on Page 2…
In the News...