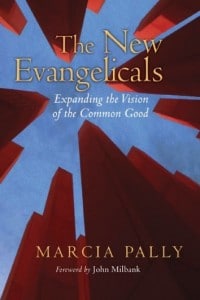 The State of the Political and Evangelical Landscapes Today

Expanding the Vision of the Common Good

A confession: I have no head for American politics.  I recognize the major players, vaguely understand the basic assumptions and policy goals of conservative vs. liberal, Republican vs. Democrat.  I know that one of the cable news channels is supposed to lean one way and another the other, and there’s The Nation, they’re conservative, right? Or is that The National Review?

See, I don’t find myself terribly invested in the approach of one side versus the other. But I would have to have been living under a rock for the last couple of decades to miss the connection between mainstream evangelicalism and conservative politics.  As an issue inside the church, it strikes me as the key divider between Jesus-followers of my generation, perhaps more than protestant vs. catholic, or evangelical vs. charismatic.  As an issue of American Religion, it’s been fodder for sociological study and political science research for most of my adult life. I think of Robert Putnam and David Campbell’s 2010 American Grace, which surveys the landscape of religion and politics to see where we see ourselves in the light of American contemporary religion.

Marcia Pally has similarly offered a significant contribution to the sociological study of religion and politics, The New Evangelicals: Expanding the Vision of the Common Good. Pally teaches language and culture at New York and Fordham Universities. New Evangelicals follows from Pally’s earlier academic work, which focuses on the roots of liberal democracy’s fundamentals, like freedom of conscience and church/state separation. Her stated intent in this book is to explore a strain of evangelicalism that seems to support those fundamentals, what she calls New Evangelicalism, encompassing the growing ranks of those who identify as evangelicals somewhere this side of the Left, and yet who break from the rigid party lines defined by the recent decades of Christian conservatism. “This book describes a portion of America’s evangelicals whose faith leads them… to support liberal democracy, to contribute to it,” (13) she writes, and then goes on in the following 250 or so pages to outline details of that contribution and the basis, policies and aims of the New Evangelicals’ political activism.