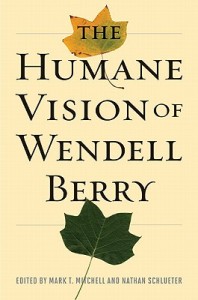 Creating a Humane Vision for Our Places.

The Humane Vision of Wendell Berry

What a wild ride it has been these past couple of years.  First, Wendell Berry was appointed as special counsel to Department of Agriculture Secretary, Tom Vilsack, and convinced him that soil conservation should be the number one U.S. agricultural goal.  Then following the advice contained in a white paper authored by Mr. Berry the State and Defense Departments have begun shuttering numerous U.S. military bases overseas and we are moving from a bellicose foreign policy to one more in line with George Washington’s non-interventionist stance toward most world events.  Lastly, nearly every state capital has created infrastructure to assist interdependence between urban and rural citizens.  Not only have farmer’s markets displaced many large regional and national grocery store chains, but there are multiple sustainable economies developing in rural areas and small towns across America.  This is due, in no small part to the stumping of Wendell Berry.  We still have problems in 2012, but thanks to this veritable Berry-palooza we are nurturing healthier communities along with cleaner ecosystems.

…And then I woke up.

I’m sure many readers of the ERB have heard of Wendell Berry, some may even have read his essays, fiction, or perhaps his poetry, however, he still remains less visible than the Kardashians for some strange reason.  I’ve introduced works of this Kentucky farmer-writer to a number of  people and have received mixed results.  Some were immediately taken with his agrarian convictions, his fictional community of Port William, Kentucky, and his intimate, quotidian poetry.  Others, not so much, finding him preachy or too agrarian.  If you have not read anything by Mr. Berry, then The Humane Vision of Wendell Berry is not a good place to start.  Don’t misunderstand, this is a fine book, but if you haven’t encountered the subject in his own words, don’t start with the secondary sources.

This book is filled with 17 essays by various authors all examining the work and thought of Berry.  This is probably the fourth book of its kind, honoring the man and his writings.  Though this particular one focuses on myriad issues, categories, and philosophies that Berry’s work touches.

Other volumes have more personal aspects of Berry included in the writing, this one only has two: Wallace Stegner, Berry’s former writing professor, wrote an open letter to his former student in 1990 praising him for his commitment to rooting himself to his place of origin in spite of calls for staying in New York or California to teach and to write.  The other, by Anne Husted Burleigh, examines Berry’s views on marriage and comments on his own fifty-year long marriage to his wife, Tanya.  Aside from that, this book gives us a less intimate view of the man and more of his thinking.

A noticeable difference in The Humane Vision is the inclusion of criticism of Berry’s writing.  Now, this criticism is given by admirers, but it is included nonetheless.  D.G. Hart examines the intersections and tensions that exist between Berry and “Conservative Christianity.”  Hart zeroes in on Berry’s distrust of the institutional church, which causes Berry to miss out on interpretations of the scriptures that are nearly as old as the church itself.  Berry claims that the passages in Matthew 6 are not otherworldly at all (“Seek ye first the Kingdom of God”), but are for the ordering of human life on earth in Berry’s conception of the “Great Economy.”  The trouble is “Christ at other places says that his kingdom is not of this world and also seems to indicate that his followers are a narrower portion of humanity that the universalistic implication of the Great Economy or the created order’s claim upon all people who draw their sustenance from the earth” (133).

Other criticisms point out how Berry’s inchoately developed view of sin hamstrings his pacifism and his leanings toward a very individualistic form of Christianity (which is surprising, given Berry’s adamant views on the necessity of strong localist ties to communities).