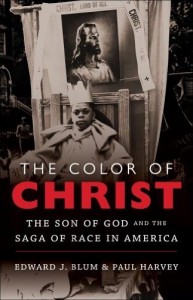 Rethinking the Story of American Christianity and Race

The Color of Christ: The Son of God and the Saga of Race in America

In recent years, there has been a flurry of new works from within Christian theology interrogating the origins of race, and exploring how Western thinking of race evolved in conversation with theological commitments. Works such as those by J. Kameron Carter, Willie Jennings, James Cone, and Miguel de la Torre have attempted to–in one way or another–provide an archeology of race and theology from the side of theology. While different from each other, they have this one thread in common: that Christianity has predominately been a white affair.

It is here that Blum and Harvey offer a potent and compelling re-reading of the relationship between racialization and theology which is sure to both attract attention, and to stir conversation about whether or not Christianity (at least, in the American context) has been as monological as has been commonly assumed. Blum and Harvey weave together a story of race and religion in which the image of Jesus–as it was appropriated and re-appropriated–appears from the very beginning of the American colonies as a work in process.

Blum and Harvey’s work opens by asking the question of how images are produced within cultures. To produce an image is, theologically and materially, a complicated issue, particular when the image in question is Jesus Christ. While Catholicism had a long history of iconography, many of the earliest settlers, particularly the Protestants, according to Blum and Harvey, saw such icons as potentially idolatrous. This theological aversion to imaging Jesus Christ left the playing field wide open in the New World for a variety of images. As Quakers, Puritans, and Jesuits began to interact with the original inhabitants, accounts from both African slaves and Native Americans speak of dreams depicting Jesus as a slave or as a Native American. Imagistic and vision-oriented accounts of Jesus began to become more common, unchecked by any other depiction which the Christian colonists might offer in response. Even when depicted as light-skinned in early colonial art, Jesus appears not as powerful, but as the suffering Christ, an image which became prominently used by African slaves. Over against a reticence for icons in public life, African-Americans began early on to speak of Christ as their brother, the one who would advocate for their freedom.

It would not be until the mid-1800s that Jesus began to be depicted as not simply light-skinned, but distinctly white, in large part due, Blum and Harvey contend, to the emergence of the Mormons. In Joseph Smith’s visions, Jesus was no longer simply light-skinned, but white-skinned and blue-eyed. Hispanic, black, and Native American images of Jesus continued to flourish, but gradually, white depictions of Jesus became more common, as Protestants became more distanced from their iconoclastic past. Through the time of the Civil War, African-American identification of Jesus as black sat side by side with Lakota images of Christ as Indian and Mormon depictions of a white Jesus. Ironically, due to the Mormons’ outsider position politically and religiously, it was the Native American and African-American images which retained more cultural currency than a distinctly white Jesus.

Though white images of Jesus were kept in slave homes during the Civil War, distinctly African-American images of Jesus flourished alongside white ones until the turn of the 20th century. At that time, missionary expansion, seeking more effective ways to promote the Christian Gospel, turned to tracts, films, and books which propagated the white Jesus. African-American and Native American images retained their backers, criticizing a collusion of whiteness with Jesus, but became significantly smaller voices, lacking the material capital to produce their images for a wider audience.  Throughout the era of the Great Depression, artists such as Clementine Hunter, Langston Hughes, Black Elk, and William H. Johnson continued to produce images depicting Christ as an African-American, such that even in an age of cultural ascendency of a distinctly white Jesus, white iconic dominance was not univocal.

Moving into the Civil Rights era and beyond, Blum and Harvey explore the ways in which Christ is once again depicted as belonging to the experience of African-Americans, and how, in more decisive ways, the relationship between Jesus and whiteness is called into question in the burgeoning liberation theology of the 1960s and 1970s. As the 20th century unfolded, a field which had been dominated by the iconic images of Warner Sallman became more pluralized once again, as Asian, Latino, African-American, and Middle-Eastern images of Jesus came into their own.

One of the greatest contributions of this work is the way in which their story thickens and complicates the trajectories of contemporary liberation theology. Rather than locating liberation theology in the late 20th century, Blum and Harvey show how iconic theology and racial reconfiguration of Jesus is as old as America itself. Similarly, Blum and Harvey show that, while white images of Jesus are certainly the most prevalent ones both historically and culturally, they have never been the only images available or the only stories that have been told. To put it differently, depictions of Jesus in ways other than white need not trade on a narrative which pits one race against another, or describe Jesus as only white in order to describe Jesus otherwise. For Blum and Harvey, Jesus in America is a Jesus who has always been racially in negotiation.

This insight brings us to a second–that the production of the images of Jesus goes hand in hand with how the groups producing these images have been recognized as political agents or not. In other words, the proliferation of Jesus in racially plural ways corresponds to the ways in which those races are a part of a national polity. The most ironic part of this particular story comes when, following the Civil War, African-Americans and their black Jesus are fully a part of the national conciseness, while the renegade Mormons with their white Jesus remain on the outer fringes.

In sum, Blum and Harvey’s book should prompt a rethinking of the story of American Christianity and race. This is not to say that Christianity has not been used to oppress one race or another. Rather, Blum and Harvey’s story is one which shows that the image of Jesus as a white oppressor in American Christianity is far from the only story. Rather, because Jesus has been depicted in multiple ways from the beginning, the resources to see Jesus in other ways do not need to be invented for American Christians, as they have always been there. The Color of Christ is a book which deserves to widely discussed and debated, and more importantly, to be listened to.