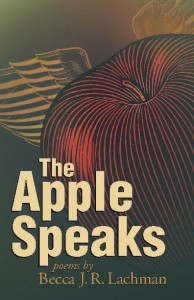 A Densely Woven Fabric
of Faith, Longing, and Embrace

We are an increasingly nomadic culture, moving into new jobs, new cities, and new technologies every couple years, out of choice or necessity. We are people whose loved ones live all around the world. This is both to be celebrated (I, for example, love that my only brother lives in San Francisco) and mourned (I miss him 361 days out of the year). And I’ve read enough Wendell Berry to know my sense of ontological identity does not go unaffected by such relational fragmentation. We are a people still searching for a place with an ache for home that can never be comforted. We are not always meant to go home, but to find or create our own. This is what the reader discovers in The Apple Speaks: the sore muscles of one thoughtfully and intentionally tending new soil.

The Apple Speaks is the first book of poems by Becca J.R. Lachman. And yet, these poems are some of the most mature and introspective I’ve read in years. Her lyrical verse is taut with awareness, not only of heart, but body, being in the world. Her voice is vulnerable, yet strong—the former making possible the latter—through which Lachman achieves total trust from the reader. And, frankly, I’ll follow her anywhere with lines like these:

So swallow-boned, my hands have learned nothing

except to want a little more, resting on wrists

that threaten by day’s end to bend, break, take

away the crescendo or the poem’s best ending

because they are hollow or just so damn tired.

Her poems take place in wild, fiery landscapes as her parents travel to war-torn Africa and her new husband to South America with a peacemaking team. They also inhabit the rural plains of Ohio where she grew up among Amish and Mennonite farmlands. Whether the place is familiar or strange (often it is simultaneously both), all of it is universal. The poems are deeply ambivalent, anchored in some of our most human paradoxes: love often entails letting go, belief blooms from doubt, and silence is a kind of song. In the poem “You Wanted this World,” the speaker visits her childhood home on her birthday. In the kitchen her mother shares her memory of the birth story, says to her daughter “You wanted this world.” Although this seems celebratory, this memory shared, the line is ambiguous. And for the rest of the book I felt Lachman’s unease in a world that is both beautiful and terrifying. The poem ends:

So many moments in life

as the morning, when spent apples

bleed into the ground untasted, and your body

takes the time to remember its birth.

Some of Lachman’s most poignant poems are those reeling in the tension of her Swiss Mennonite heritage. One finds Lachman resistant to define her faith or define what it means to be Mennonite, and yet also urgent to re-define it. For this reason, many of these poems embody the qualities of a hymn, the music of lament, reverence, and grace. In the last poem, called “New Marriage, a Barn Raising,” the speaker admires the event of a community barn raising, of young and old gathered together for fruitful labor. But Lachman romanticizes neither their arduous efforts or new marriage, instead recognizing the tender faith necessary for both.

What grins up squinting is

certainty they long for: childhood, the sturdier

step on ground they know, even a body not

one’s own. Each acts out the expected, assembles

despite any previous plans. Walls go up slow

We may be an individualistic, nomadic tribe, us Americans, but our desire for place will never cease manifesting. When I think of Lachman’s poems I think of cultivation, of a nourished field producing this season’s harvest, when last season it was ravaged by floodwaters. “O urgent / love, come back and see this time next year what stands.” It takes faith to cultivate our place, to venerate and nourish its soil.

Much more can be written about The Apple Speaks, about her poems traversing the terrain of new marriage, or the one about the legendary Columbian piano, or—one of my personal favorites—the poem about a potluck attended solely by confessional poets; Plath, Sexton, Lowell all show up. Lachman is not without some humor and serious wit: “Nothing like a dinner party where every guest / is self-invited” and then “A table for each of us—the help / must’ve figured we’d only want to talk / to the self.” And, of course, there is the poem about conscientious objectors from World War II who served as smokejumpers in Montana. That poem is worth the price of the book. Many are. So yes, much more can be written, for The Apple Speaks is a densely woven fabric of faith, longing, and embrace. But I urge you to read and hear for yourself.

Caitlin Mackenzie is a writer living in Eugene, OR. She works in academic book publishing, but only when she’s not playing in the mountains or rivers. She has a MFA from Bennington College and a few poems published too.