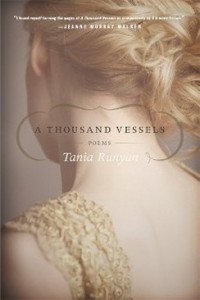 The Spiritual Discipline of Earnestness.

Tania Runyan demonstrates her abilities as an accomplished poet in a study of certain key women of the Bible. The result is A Thousand Vessels, a beautiful collection of verse. This collection is divided into sections, one for each Biblical figure that Runyan explores through intensely personal verse. With grace and perception, the poet develops the emotions of these women, breathing life into characters whose depths are only hinted at in the thin paper pages of the Bible. An obscuring veil is gently lifted and we, as readers, are privileged to glimpse the inner monologue of long-revered heroines, imagining with Runyan their triumphs and heartaches. Runyan at once honors and reinvents the singular experiences of these few women of the Bible, specially chosen as “vessels” and figured prominently in God’s plan for the world.

The title of Runyan’s collection informs one of the main themes of the work. As “vessels,” women are chosen to bear the world’s heaviest weights and also to bear its greatest glory. In two poems, Runyan connects the pregnancies of Sarah and Mary with the fantastic image of a star. Sarah turns from the night sky and feels a pain in her side “as if a star had dislodged / there and, turning and scraping / and shining its path, settled / into the bare sky of her body.” A poem about Mary echoes this as, in the voice of Mary, Runyan writes, “I carried rivers and cedars and mountains. / Stars spilled in my belly when he turned.” As vessels for the children that grow inside them, women experience the pains of childbirth and the horror of seeing their children harmed. The subject of childbirth and motherhood is unmistakable in this collection of poetry. In the composition “The Birth of Cain,” Runyan describes Eve’s labor pains: “like a thundercloud in a field. / A lion tore through my body, / and the lion caught fire.” Towards the middle of the collection, in a poem that may well be the pivotal work of the book, Runyan imagines Mary’s response to her son’s death at Calvary, asserting, as Mary, that “God creates women for no reason / but grief. He can’t cry himself / and needs a thousand vessels for his tears.” Women are vessels for the sorrows of the world. They are burdened with awful tragedies and expected to bear great afflictions and humiliations, but, like the Virgin Mary, they are also vessels of great glory and can spill over with joy and happiness. Images of vessels, such as goblets of wine or the communion cup, abound in Runyan’s collection. In a poem entitled “The Wedding at Cana,” Runyan describes Jesus’ first miracle in which he transforms water into good wine. In an exhilarating scene, “ . . . Jesus whirled and whooped / in the middle of the room as his small, graying mother / poured the goblets like mad, wine spilling over her wrists.” The joyfulness of this scene is communicated through the overflowing vessels of wine, poured out and given round by Mary. Biblical heroines collect great delights as well as great sorrows, storing them up and sharing them around.

Alongside the poems that are most obviously centered on a particular Biblical figure, Runyan places intimate poems about her own life. She candidly tells of her childhood and her family, of her young daughter chewing bananas in the soft morning light of the kitchen or sitting on Runyan’s lap and grasping for the communion wine during a church service. While her poetry beckons with the simple love of simple things, Runyan does not shy from harder subjects such as the shame of childhood offenses, child molesters, and the very real possibility of death.

Careful comparison of personal images with those from the perspective of Biblical women affects both the reader’s view of herself and of the Biblical women Runyan recreates. Placed side by side, a beautiful weightiness is leant to Runyan’s, and thereby our, mundane and everyday involvements, reminding us that the stories we are living out today become history as each moment passes. The lives of these honored females were largely unextraordinary; each woman performed her daily chores and tasks, carrying jugs of water to and from the house, making bread to feed her husband and children. As the voice of Ruth in “Ruth Speaks to Naomi,” Runyan writes, “ . . . we will boil the grain and sweep the dirt, / comb each other’s hair in the evening / and feel the coarse curls fall / between our fingers.” The poem illustrates two ordinary women about their ordinary tasks. And yet these individuals who spent so much time at their chores are noted in the Bible for their faith and devotion and for the precious part each played in God’s plan for salvation. We too are valuable figures in God’s plan, living our lives according to a great and majestic story that is slowly being revealed. The contrast between personal images and historical ones in A Thousand Vessels also suggests a familiarity and a lack of formality towards the featured Biblical women. It is as if Sarah, Ruth, and Martha were the poet’s cherished friends and not the solemn saints of Christendom, honored for millennia by devout pilgrims and worshippers.

The captivating presence of Runyan’s poetry is enhanced by her simple word selection and the natural rhythm, akin to speech, that she engages. The first poem opens with “May splays its colors over the burbs. / I cannot stop staring / at the six hundred magenta tulips / bordering Century Corporate Park.” Less like poetry than it is like prose, her words and rhythms are effectively subdued and softened so as not to distract from its weighty content.

Despite the emotional crisis that she reaches in certain compositions, Runyan skirts the peril of sentimentality. She plunges into the depth of emotion and follows the complicated twists and turns of human experience, but avoids melodrama or that all-too-customary feature of Christian writing — a forced and happy resolution of real concerns. In this, a stunning success, Runyan is very brave. It is a tragedy of our current age that many of us would go to great lengths to avoid the appearance of emotion or affectation. In the attempt, we restrict ourselves to sarcasm and half-truths, or to sly suggestion to convey meaning. Writer and speaker Ann Voskamp has been criticized for her recent book One Thousand Gifts (Read the ERB review), a work whose title and honest content bear some resemblances to Runyan’s collection of poetry. Defending her book, the words of which are sometimes uncomfortably sincere, Voskamp gracefully demonstrated the importance of speaking earnestly without deflecting meaning through humorous quips. She also extended an invitation to dinner to one of her critics. Voskamp’s writings and actions demonstrate earnestness, a valuable spiritual discipline that Tania Runyan herself has learned and practiced.

One of the most sincere collections of contemporary verse, A Thousand Vessels deserves a place on the nightstand of the thoughtful and thankful reader.